On October 6, Dr. Joshua Hochschild delivered a lecture entitled The Problem of “Liberalism”: Lessons from John Henry Newman to students and faculty at Christendom College. 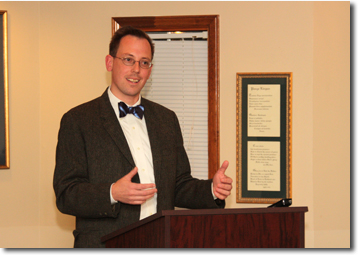 Hochschild, an Associate Professor of Philosophy and the Dean of the College of Liberal Arts at Mount St. Mary’s University, discussed the rich tradition of Newman’s thinking. He explained that some have accused Newman of being a progressive or a liberal, but that is not the case.

“Today Blessed John Henry Cardinal Newman is very close to being declared a doctor of the Church,” Hochschild said, “and he described himself as a life-long critic of liberalism.”

Hochschild explained that Newman had criticized liberalism for emphasizing the primacy of individual liberty independent from of any kind of authority. Although Newman took an innovative approach to Catholic doctrine, he defended the importance of the primacy of dogma.

“The lecture was timely, in light of Cardinal Newman’s recent beatification,” Senior Tyler Lowe said. “I really liked the way he emphasized Newman’s thought that even though we can’t use discursive reasoning to argue the faith, we can still say there is a relationship between faith and reason and that they are complimentary. I think there’s a message there for all the relativists in modern universities.”

Students and faculty discussed the thinking of Blessed Newman further with Hochschild following the lecture.

“Dr. Hochschild’s presentation of Newman as both an innovative yet orthodox thinker was fascinating,” Junior Mary Becher said. “And I love the way Newman’s critique of the liberalism of his own time is still relevant today.”

Christendom senior John Killackey enjoyed how Hochschild showed Newman was indeed a champion of the Church’s tradition. “His lecture inspired me, and I am sure many others, to study his writings with renewed respect and interest,” Killackey said.

The event filled the St. Thomas Aquinas Lecture Hall with students who enthusiastically questioned Hochschild after the lecture.