Dr. Ray Guarendi Explains the Benefits of Being Catholic 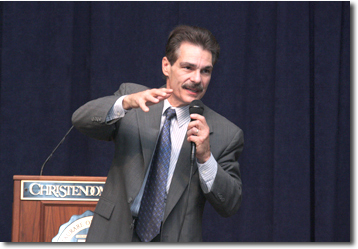 “There is only one reason to be Catholic—not because you love father’s homilies, not because they have great youth groups, not because the cutest girl in the world sits in that third pew—it’s because it’s true,” clinical psychologist and radio personality Dr. Ray Guarendi told students at Christendom College on November 8. “If it’s not true, get out of it. Go do what you want. But if it is true, it is everything.”

His talk, entitled “Why Be Catholic,” exposed the common fallacies in the Protestant system that he discovered during his journey from evangelicalism to Catholicism.

Guarendi, a father of 10, is host for the radio show The Doctor Is In, which is featured on Ave Maria and EWTN Radio. He has been a regular guest on national radio and television, including Oprah, 700 Club, and CBS This Morning. He is the author of several books, including Discipline That Lasts a Lifetime, You’re a Better Parent Than You Think!, now in its twenty-fifth printing, and his newest book, Good Discipline, Great Teens.

Guarendi explained that he was deep into the evangelical world; at one point he was involved with four Bible studies and a prison ministry. His search for the truth led him to the early writings of the Church.

“I wanted to see what the Church actually thought like in the first three centuries,” he said. In his research he found that the early Church baptized babies, confessed to priests, had a special headship for the Bishop of Rome, and prayed for departed souls.

“All the things that I was told was all Catholic junk that was added on to the pure and simple Gospel message, was there,” he said. “That shook me up.”

It was in these early writings that Guarendi also found accounts of the Church’s belief in the True Presence of Jesus in the Eucharist.

“I used to tease my Protestant friends,” Guarendi said. “I’ll make you a deal. You find me one early Church Father in the first thousand years that said this is nothing but a memorial meal—that’s all it is—it’s never meant to be anything else, and I could consider looking back at the Protestant church. But if I find you 25 early writers who said this is our Lord Himself, would you convert?”

Guarendi also pointed out that he saw a serious flaw in the lack of unity among Protestants. When he questioned his fellow Protestants on the presence of 35,000 different Protestant sects, he was told that they agreed on the basics and all the disputes among the sects were ancillary. Guarendi saw that that was not the case, for when it came to the issue of abortion, Protestants were in disagreement.

“Is ‘life’ not a basic?” Guarendi asked.

His talk was full of humorous stories about family life and his path to conversion.

“It was really entertaining,” Senior Ania Zganzniac said. “Sometimes in dealing with Protestants, you just don’t know where to start and he gave us some great insights and talking points.”