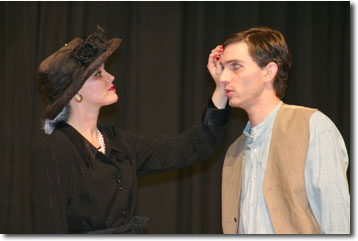 The Christendom College Players filled the Skyline High School Auditorium with mystery, thrills, and laughter with their performance of Agatha Christie’s Appointment With Death on November 12-14.

Appointment With Death, tells the story of Drs. Theodore Gerard and Sarah King, who while holidaying in Jerusalem, encounter the strange Boynton family. The family head, Mrs. Boynton, is a sadistic and tyrannical mother who attracts the strong dislike of many people around her—including her family. When she is found dead, Gerard and King work to solve the case.

Directed by Christendom Alumnus Peter Smith and Christendom English Professor Dr. Patrick Keats, the play successfully captured the intrigue and excitement for which Christie’s plays are so well known.

“This play, though less famous, appealed to Peter and myself because of the complexity of the characters, the masterful study of evil and its portrayal of how that evil can take over a family,” Keats said. “The play is so much more than just a ‘whodunit’ murder mystery.”

The direction of Smith and Keats coupled with a colorful and delightful cast showcased Christendom’s dramatic talent.

“It’s difficult to recall a group of actors that has been more hard-working, enthusiastic, or easier to work with,” Keats said.

Senior Margaret McShurley played the creepy Mrs. Boynton. Her portrayal of the deranged woman sent chills through the audience as she manipulated and psychologically terrorized her family members.

A shining light on the stage was Sophomore Nicole Koopman who played the strong and caring Dr. Sarah King. Her chemistry with her fellow players was strong across the board and she played an excellent foil to the conniving Mrs. Boynton.

Seniors Steve Curtin, as Dr. Gerard, and Mary Harrington, as Nadine Boynton, both gave memorable performances.  Surges of comedic energy hit the stage whenever Sophomore Philip Briggs and Freshman Joe Duca were on.

“I was most impressed with Peter Smith’s skillful direction,” Joe Duca said. “He’s very much an actor’s director, incredibly good at demonstrating what it means to inhabit a character and really conveying to us a sense of the actor’s vocation—to be teachers as well as entertainers. Overall, it was a fulfilling and exciting experience.”

Philip Briggs also had a great time in the production and was impressed with Smith’s direction.

“It was such a blessing working with Peter Smith. He taught us so much about acting both in specific ways such as how to deliver lines, but also in a general sense of how the stage is a metaphor for life,” Briggs said. “Being in the play was the most fun I have had since I’ve been at Christendom.”