College to Hold Record Number of Summer Programs in 2011 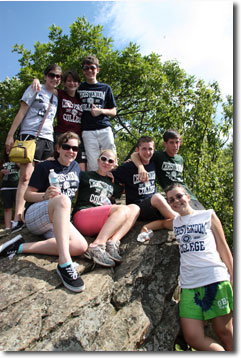 The four one-week “Experience Christendom” Summer Programs will be held for rising high school seniors from June 11-18, June 19-26, July 2-9, and July 10-17. Each of these four sessions costs $500 and is sure to be a life-changing experience, as it has been in the past for so many former participants.

“Before coming to Christendom I heard the interviews online and my Mom told me how tons of kids said their lives were changed by the program and it was the best experience of their lives,” says Micah, who participated in one of the one-week programs last summer. “I thought that these kids were crazy and just needed to get some actual friends. After about the second day at camp I realized I was just like every other kid who came to the camp. I met friends and after only a few days it seemed I had known them my whole life. My week at Christendom was the best week of my life and I most definitely want to spend my college education at Christendom breathing in a Catholic atmosphere.”

This year’s Latin Immersion Program is being totally re-vamped from past years and will be structured similar to the “Experience Christendom” Summer Programs. Students will spend close to three hours a day immersed in speaking Latin as a living language. The afternoons and evenings will be filled with recreational and social activities to give participants a feel for what life would be like being a student at Christendom College. The one-week program will be held July 17-24 and will cost $895.

“The ability to come together with a bunch of Latin speakers in one place is something you don’t expect to find in 21st century America,” comments Linnea, a past Latin program participant from California. “It was an experience that not only improved our Latin, but also built new relationships, strengthened our faith, and increased our knowledge.”

The Graduate School’s six-week summer session begins June 20 and ends with graduation on July 30. Christendom offers a Graduate Summer Program for those students who wish to pursue graduate Theological studies during the summer. Both the Master of Arts in Theological Studies degree and the Apostolic Catechetical Diploma may be earned at the Summer Program, over the course of at least four summers. It is a residential program, held at the main Front Royal campus, enabling people from all over the United States and abroad to attend the Graduate School. This program is popular with students who are not able to move to the Northern Virginia area for the regular (fall/spring) graduate program, and with teachers and others who have summers off.

The Vita Consecrata Institute (VCI) is an intense summer program of theological studies and spiritual renewal for religious, priests, seminarians, and other consecrated persons. The VCI focuses on the theology of the consecrated life as reflected in the mission and life of the Church. Students penetrate the mystery of the consecrated life by investigating magisterial documents (especially those of Vatican II and Pope John Paul II), by examining the rich historic tradition of the Catholic Church, and by prayerfully reflecting on this wondrous gift. The institute is structured in such a way as to assure religious men and women the full living of their consecrated life in a context of prayer, silence, study, and community. Students may earn graduate credit towards the degree of Master of Arts in Theological Studies from Christendom College, or they may attend for personal renewal, auditing courses and participating in the liturgical life of a community enriched by the religious of various congregations. The first session begins June 27 and concludes on July 8 while the second session begins July 11 and ends on July 22.