David Clayton, a professional Catholic artist, will deliver a lecture on the theology and history of Catholic art at 7pm on Tuesday, December 14 in St. Kilian’s Café. 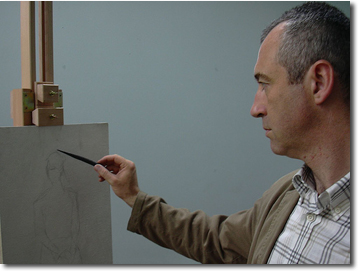 Clayton is a graduate of Oxford University, where he gained an M.A. in Materials Science, and Michigan Technological University, where he gained an M.S. in Engineering. He paints and draws in two Christian artistic traditions—Byzantine iconography and Western classical naturalism (training at the Charles H. Cecil Studios in Florence, Italy). He has had commissions in the United Kingdom and in America including a portrait of St. Luigi Scrosoppi at the London Oratory; a five foot cross, gilded and painted on both sides and suspended over the altar at Pluscarden Abbey in Scotland; and the icon of the Sacred Heart commissioned by the Maryvale Institute in Birmingham to commemorate their 25th anniversary. He has illustrated three books for children, the most recently published was written by Scott Hahn.

Clayton’s articles about art and education have appeared in Catholic publications such as Second Spring, St Austin Review, the Catholic News Agency website, and The Catholic Herald newspaper in London. He is an Artist in Residence at Thomas More College.