The Christendom Graduate School is pleased to welcome Dr. Robert Matava to the ranks of its faculty as a full-time Assistant Professor. 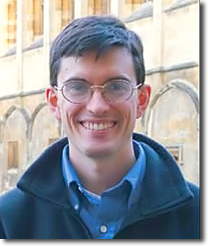 Matava will teach theology classes on various topics, including God the Father, Apologetics, and the Synoptic Gospels during the fall semester. In the spring, he will be teaching Ecclesiastical Latin, the Virtues, and the Trinity. Matava is also a postdoctoral fellow at Georgetown University where he is working on developing his thesis into a book. His research interests include: creation, providence and free will; practical reason; truth in St. Thomas; and the kingdom of God.

“We are very blessed to have a professor who combines an impressive scholarly background, dedication to student learning, commitment to the Christendom mission, and a down-to-earth, friendly style, ” said Dean Kristin Burns. “He’s a perfect fit.”

Graduating in 2002, both RJ and Danielle opted to continue their academic careers in the Washington DC area. Matava worked on his MA at the Dominican House of Studies, while Danielle pursued an MS in psychology at the Institute for the Psychological Sciences. Before finishing their degrees, they knew it was love and were wed on July 17, 2004, at their alma mater. Abigail, their first child, was born the following summer.

In 2006, the growing Matava family crossed the pond for RJ to complete his education with a PhD from the University of St. Andrew in Fife, Scotland. Founded in 1413, St. Andrews is the oldest university in Scotland and the third oldest in the English-speaking world. It was during this time in Scotland that the Matava’s second child, Benedict, was born.

With his dissertation nearly complete, theMatavas moved to another locale within the United Kingdom: the University of Oxford in England. From 2009-2010, RJ Matava was the Liddon Fellow at Oxford’s Keble College where he taught students and completed his doctoral thesis on the Controversy de Auxiliis: the sixteenth-century dispute between Dominican and Jesuit theologians on the relationship between grace and free will. RJ successfully defended his thesis this past spring and the Matavas returned to the US four months later.

Just this past October, Danielle and RJ welcomed their third child into the world: a little girl name Isabelle Ruth. the family lives in Alexandria, VA, with close access to Queen of Apostles Church and the Graduate School.