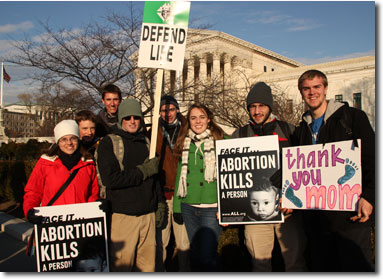 Christendom College cancelled classes and provided transportation for its entire student body to attend the 38th Annual March for Life, held on January 24 in Washington, D.C. Since its founding in 1977, Christendom College’s administration has encouraged its students, faculty, and staff to attend the annual pro-life event in the Nation’s Capital.

Students began the day with Mass and prayed the four different mysteries of the rosary en route to and during the March—making the event a time for both political and spiritual action.

“One thing that struck me was the difference between the pro-abortion protesters chanting ‘keep abortion legal’ in front of the Supreme Court and the pro-lifers praying the rosary across the street—you could really feel the power of prayer battling against the devil,” Junior Andie Smith said.

The college’s Student Activities Council charted eight busses to bring over 400 people to the March this year. In 1984, 1998, and 2009, Christendom College was given the honor of leading the March for Life carrying the lead banner and flags.

“I love the fact that all of Christendom goes to the March,” Junior Christine Nussio said. “Bringing the culture of life back to our society is part of the college’s mission and what we are all trying to do in restoring all things in Christ.”

Nussio was impressed by the number of pro-lifers who attended.

“I am blown away by the numbers—and some of them come from very far away to spend one day showing the nation where they stand on issues of life,” she said.

The numbers also amazed Sophomore Jacinta Ferri. “It seemed like a larger crowd than last year—it was really exciting,” she said.

A native of Canada, Ferri said that before coming to Christendom, she attended the March for Life in Ottawa where the crowd is not as large. “Being in the larger crowd gets you more pumped-up for the cause,” she said. “It’s really reassuring to see so many people.”

Christendom College students are active in pro-life efforts throughout the year as well, most notably each Saturday morning when many of them travel to Washington, D.C., to protest outside a Planned Parenthood clinic. Other students take part in pro-life activism through the Students for Life groups, while others help out with the College’s outreach program and work with the local crisis pregnancy center.