Author and Professor of Literature Dr. Michael Mack delivered a lecture entitled “Hamlet: Shakespeare’s Mousetrap?” to students and faculty at Christendom College on February 7. The talk was the first in the College’s new Faith & Reason Lecture Series. 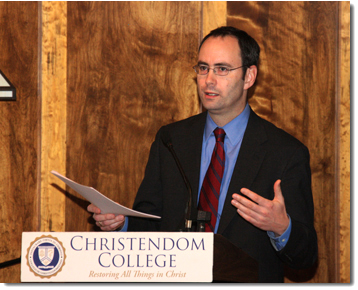 In his lecture, Mack revealed how Shakespeare uses one of his most famous plays to cause the audience to examine their own conscience. In the play itself, Hamlet uses a play,The Mousetrap, to cause the villain, Claudius, to examine his conscience.

Mack is an Associate Professor of English and the Dean of the Undergraduate Program at The Catholic University of America. He received his Ph.D. from Columbia University. His research interests include Shakespeare, sixteenth and seventeenth-century English poetry, and Renaissance literary theory. In 2005, CUA Press published Mack’s book, Sidney’s Poetics: Imitating Creation. He is currently working on a book on Shakespeare.

Mack explained that the play’s title, The Mousetrap, is no coincidence or simple metaphor for catching the villain. More interesting still, the mousetrap actually has a theological significance.

“Though hard for us to imagine, the mousetrap was a type of the Cross,” Mack said.

Mack said that it was St. Augustine who first introduced the image of the Cross as a mousetrap.  Quoting Augustine, Mack said, “The devil jumped for joy when Christ died; and by the very death of Christ the devil was overcome: he took, as it were, the bait in the mousetrap. He rejoiced at the death, thinking himself death’s commander. But that which caused his joy dangled the bait before him. The Lord’s cross was the devil’s mousetrap: the bait which caught him was the death of the Lord.”

Mack noted that the dramatic drive of Hamlet makes the audience eager for revenge and frustrated by Hamlet’s inactivity and inability to plan. However, Hamlet’s desire to act ethically is what causes him to stall or act rashly.

“If you think it’s easy to live ethically, it surely is a sign that you live in a very small world,” Mack said. “Try being the Prince of Denmark, and your father just died, and your scuzzy uncle has bedded your mother, and your father’s ghost has ordered you to kill him, and your country is on the brink of war, and your girlfriend just committed suicide, and you’re stuck with friends like Rosencrantz and Guildenstern.  It would test your faith.”

The Mousetrap, like a type of cross, forces Claudius to confront his sins and face his guilt. The play, Hamlet, evokes vengeful emotions from the audience that should not be felt. With Hamlet’s demise at the end, the audience is forced to see that there is something wrong with them, causing the audience to reflect on their weakness and guilt, Mack said.

The play teaches us that it is not our job to plan and scheme as the villains in Hamlet do, he said.

“Our job is to be ready when [God] approaches and calls to us.  This is how the Mousetrap—the real thing, not Hamlet’s—works,” he said. “All that’s needed is for us to stop all of our plotting and scheming—and to know truly that the readiness is all.”

The Faith & Reason Lecture Series was born of the spirit of Faith & Reason, the academic journal of Christendom College. The mission of the journal and this series is to create an educated Catholic laity, a laity in love with all that is good, beautiful, and true. The series will continue in April with a lecture by Dr. Gerard Wegemer on St. Thomas More and liberal arts education.