Students Look to Their Futures at Annual Discernment Weekend 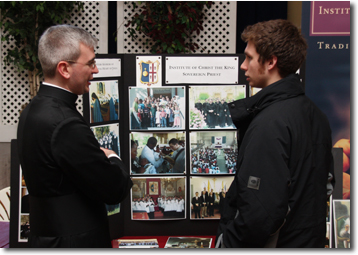 Over 30 religious, priests, and laymen from across the country joined the students of Christendom College for its annual Discernment Weekend, held February 11-13. The weekend offered students time for prayer, reflection, and discussion on the religious, priestly, married, and single vocations.

The weekend was launched with Vespers on Friday night led by Rev. Chrysostom O.Praem of Saint Michael’s Abbey in Silverado, Calif. Special men’s and women’s gatherings were held following Vespers. On Saturday, the St. Lawrence Commons was filled with priests and religious who were able to meet with students and explain their order and way of life. The afternoon featured a series of break-out sessions on discernment topics ranging from “Religious Life,” to “Discerning While Single.”

Clinical Psychologist Dr. Michael Horne, a psychologist of Meier Clinics in Fairfax, Va., delivered a talk entitled “Communication in Relationships” as part of the weekend’s segment pertaining to the married life. He told students that for every negative interaction, there has to be at least five positive interactions. Anything less than that creates a negative culture in the relationship, he said.

“What we’re doing is trying to build a foundation based on the dignity and the respect of the other – that self gift of love,” he said. “We’re looking to feel a sense that the person sees us genuinely, sees us honestly, sees our dignity, sees the respect we have, because we’re made in the image and likeness of God. And if we feel that that’s where the other person is coming from, it strengths the [relationship’s] foundation.”

“All of the talks I attended gave me a lot to think about regarding discernment,” Freshman Kelsey Ingold said. “The college did a great job with this weekend, and I know many more students who were also grateful to be a part of it.”

After Saturday evening Vespers, led by Prior Gregory Gresko of the Benedictine Abbey in Richmond, Va., students gathered in St. Kilian’s Café for a joint social. The weekend concluded with Sunday Mass and brunch where the priest and religious were once again able to spend time with students.

“The graciousness and generosity of the religious who came to visit, and the organization and hospitality of the school, resulted in a beautiful and peaceful weekend for all who were involved,” Senior Ania Zganiacz said. “I’m sure that discernment weekends, such as this one, will bear much spiritual fruit. It was an amazing event.”