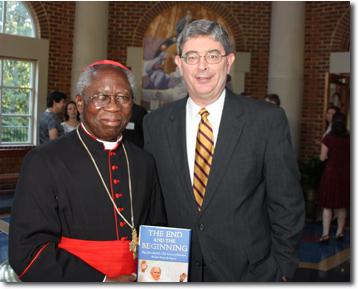 Acclaimed author and speaker George Weigel will deliver a lecture to students and faculty at Christendom College’s Rome campus on March 7 at 7:30 p.m. The lecture, entitled “The Achievement of Blessed John Paul II,” will be held in the Rome campus’ academic center, Istituto Maria Santissima Bambina.

“We are delighted to have George Weigel with us in Rome,” College President Dr. Timothy O’Donnell says. “Along with the rest of the world, we look forward to the beatification of Pope John Paul II. It is my hope that this talk will help our students enter into this great moment in the Church.”

George Weigel, a Distinguished Senior Fellow of the Ethics and Public Policy Center, is a Catholic theologian and one of America’s leading public intellectuals. Weigel is the author of over twenty books, including Letters to a Young Catholic, The Cube and the Cathedral: Europe, America, and Politics Without God, Witness to Hope: The Biography of Pope John Paul II, and his most recent work on Pope John Paul II, The End and the Beginning.  He is a frequent guest on television and radio and is the Vatican analyst for NBC News. His weekly column, “The Catholic Difference,” is syndicated to sixty newspapers around the United States. His scholarly work and his journalism are regularly translated into the major European languages. Weigel is a long time friend of Christendom College and a member of its Advisory Board.

“Christendom College is one of the best liberal arts colleges in America,” Weigel says. “Its commitment to providing its students with an integrated, rigorous core curriculum, combined with a vibrant Catholic atmosphere that permeates every aspect of the college experience, marks it as a distinctive and precious resource.”

The lecture, while primarily for the students of Christendom College, is open to the public. The Istituto Maria Santissima Bambina is located at Via Paolo VI, No. 21. Vatican City. For more information about this lecture please contact John Noronha, jnoronha@christendom.edu.