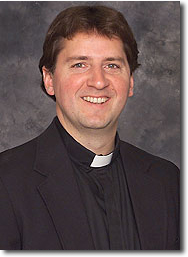 Christendom College Alumnus Rev. Francis Peffley will deliver a talk to students on Friday, March 18 at 4:00 p.m. in St. Kilian’s Café. The subject of the talk will be the Legion of Mary and St. Louis-Marie de Montfort’s True Devotion to Mary.

“I believe my vocation was fostered in three ways,” says Rev. Peffley. “The example and inspiration which I received from my family; the spiritual and academic formation I received from Christendom College; and my involvement in the Legion of Mary.”

Ordained to the Catholic Priesthood on May 19, 1990, Rev. Peffley is currently serving in the Diocese of Arlington as Pastor at Holy Trinity Catholic Church in Bristow, Virginia. A 1986 graduate of Christendom College in Front Royal, Virginia with a Bachelor of Arts Degree in Theology, he received his priestly formation at Mount Saint Mary’s Seminary in Emmitsburg, Maryland, where he received his Master of Divinity and Master of Arts Degree. In addition to his parish duties, Rev. Peffley also serves as the Diocesan Spiritual Director for the Legion of Mary, an apostolic organization in which he has been a member for over twenty-five years. He has also been a Chaplain of the Knights of Columbus council in each parish in which he has been assigned.

Rev. Peffley is especially active with parish young adult ministry, retreat work, Catholic apologetics, and evangelization. Articles that he has written have appeared in a variety of publications, including Homiletic and Pastoral Review, Queen Magazine, Maria Legionis, Lay Witness, and the Arlington Catholic Herald. He has recorded over one-hundred audio tapes on Spirituality, the Saints, Apologetics, Evangelization, and the Family.

For more information about this talk, contact Martin Schmidt at
mschmidt@christendom.edu.