Acclaimed author and speaker, George Weigel, delivered a lecture to students and faculty at Christendom’s Rome campus on March 7. The lecture, entitled “The Achievements of Blessed John Paul II,” was held in the Rome campus’ academic center, Istituto Maria Santissima Bambina, located directly next to the Vatican.

“The achievement of John Paul II flowed from decisions he made when he was your age,” Weigel told students. 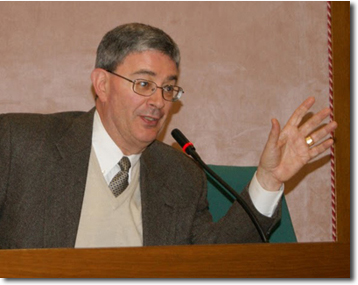 He discussed the Pope’s formation as a young man in Poland and his journey to the priesthood. John Paul II attended a clandestine seminary due to the Nazi occupation of Poland. Archbishop Sapieha, who ran the seminary, left a lasting impression of what it meant to be a priest.

“In that experience was formed a heroic image of the priest and bishop as a defender of the rights of the human person in this very talented young man who would become John Paul II,” Weigel said.

Weigel also detailed the tumultuous last years of John Paul’s life. He spoke about the fact that the Holy Father was living with Parkinson’s disease, while at the same time, having to govern and lead the Church in the events following the September 11 terrorist attacks in the US, and revelations about corruption within the Church herself. Weigel concluded with a probing and comprehensive assessment of a man who lived his life as a witness to hope in service to the ideals he embraced.

“All of you have grown up in a culture that constantly panders to the young people,” Weigel said. “[John Paul II] did not pander to them. He told you that you were capable—through the grace of God—of great things, and he said to never settle for anything less than the spiritual and moral greatness that the grace of God makes possible. Young people responded to that by the millions, as I hope you will too—particularly through this special time in Rome.”

George Weigel, a Distinguished Senior Fellow of the Ethics and Public Policy Center, is a Catholic theologian and one of America’s leading public intellectuals. Weigel is the author of over twenty books, including Letters to a Young Catholic, The Cube and the Cathedral: Europe, America, and Politics Without God, Witness to Hope: The Biography of Pope John Paul II, and his most recent work on Pope John Paul II, The End and the Beginning. He is a frequent guest on television and radio and is the Vatican analyst for NBC News. His weekly column, “The Catholic Difference,” is syndicated to sixty newspapers around the United States. His scholarly work and his journalism are regularly translated into the major European languages. Weigel is a long time friend of Christendom College and a member of its Advisory Board.

“We were delighted to have George Weigel with us in Rome,” College President Dr. Timothy O’Donnell said. “Along with the rest of the world, we look forward to the beatification of Pope John Paul II. This talk definitely helped our students enter into this great moment in the Church.”

“Christendom College is one of the best liberal arts colleges in America,” Weigel recently wrote. “Its commitment to providing its students with an integrated, rigorous core curriculum, combined with a vibrant Catholic atmosphere that permeates every aspect of the college experience, marks it as a distinctive and precious resource.”