The Christendom College Rugby Team won a tournament at Hampden-Sydney College on March 19. Under the guidance of first year head coach Don Briggs, the Crusaders won 2 out of 3 games scoring the most tries of all teams.

“The men played extremely well in all three matches and represented Christendom in a tremendous fashion,” Coach Briggs said. 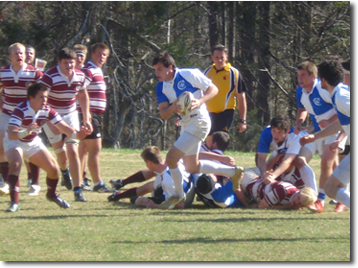 With more than half the team being rookies, the first game was a tough 14-19 loss against Christopher Newport University. The team had beat the Crusaders two years before and were nationally ranked as number 15 in the nation. In the second game, against Lynchburg University, the Crusaders were victorious, winning 31-10. The third game was played against Hampden-Sydney College, who had just defeated Christopher Newport. Christendom held Hampden-Sydney at their try line for three drives and let in only two tries. Christendom scored five. The final score was 31-12.

“Every team invited us to play them again, anytime we would like,” player Ben Raneri said. “The guys played like Catholic gentleman, they played like Crusaders.”

The Crusaders are back in action on March 25 at George Mason University in Fairfax, VA, at 6p.m.