Christendom College Players to Perform The Merchant of Venice 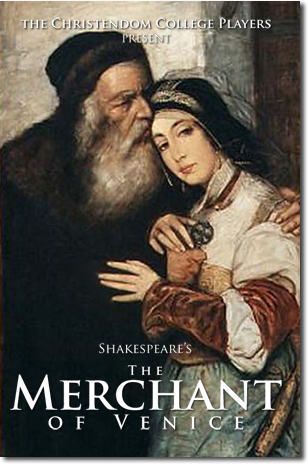 The Christendom College Players will present Shakespeare’s, The Merchant of Venice, on April 8-10 at the Warren County High School Auditorium in Front Royal, Virginia.

The production’s primary director is alumnus Peter Smith, who is assisted by other veterans of Christendom Players’ productions: sophomores Kelly Lawyer and Alexis Thornton, alumnus and past director, Mike Powell, and faculty moderator and English professor Patrick Keats.

“Merchant has just about everything one could ask for in a play,” Keats says. “There are some very colorful characters, such as Shylock, the devious moneylender, and the lovely Portia, who matches wits with him—a suspenseful courtroom scene, three sets of romantic lovers, and some of Shakespeare’s most beautiful verse.”

Keats also says that he and director Smith will be acting in the play.

Leading actors in the play include sophomore Olivia Aveni as Portia, senior Steve Curtin as Shylock, freshman James Ciskanik as Bassanio, and freshman Mike Heffernan as Antonio. The rest of the cast consists of a mixture of students, alumni, and college staff members.

For more information, or to reserve tickets at the door, call Christendom College at 800.877.5456 ext. 1390. High School Auditorium is located at 155 Westminster Drive, Front Royal, Virginia.