Economist Dr. Aguirre: Healthy Marriages are Good for the Economy

Dr. Sophia Aguirre, an associate professor of economics at the Catholic University of America, delivered a lecture entitled “Freedom for All: An Integral Approach to Economic Development” on March 30 to students and faculty of Christendom College. 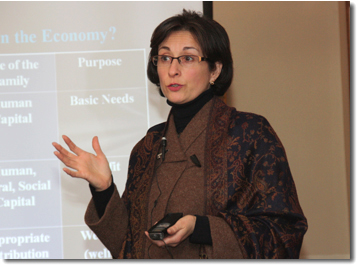 “When I was being trained as an economist, it was all about math,” Aguirre said. “Now we need to look at progress in quality of life, not just economic development.”

Aguirre, who has testified in front of Congress and the U.N., explained that the economy can not be measured only by the Gross Domestic Product (GDP), inflation, and unemployment rates in a nation. The quality of life of its citizens must be taken into account—their education, health, life expectancy, and potential.

Human capital is a key factor in economics. If a nation’s people are not well, then they do not work well and can drain a nation’s recourses, she said.

Aquirre presented empirical data which showed that healthy marriages and families created psychologically and physically healthy children. Families with both biological parents that sat down to eat regularly and converse with their children had a higher level of income. The children also did well in school and avoided substance abuse.

When families did not sit down to eat together or children were being raised in single parent homes, the income level dropped and the likelihood of children doing drugs or performing poorly in school increased dramatically.

“Clearly legislation that supports healthy marriages and stable families are key. This is not a luxury good or option for sustainable growth.  When we talk about the elimination of poverty for children, we better start looking seriously at family structure,” she said. “We need a new approach to economic development that works a lot with institutions, that supports the family, and that knows how to measure correctly.”

This event, funded by the Koch Foundation, was cosponsored by Christendom College’s Cincinnatus League, a student forum for conservative political philosophy. The League offers students a conservative book club and lecture series, helping students apply the philosophical foundation they have received at Christendom to problems in contemporary education and politics.

Other presentations and current research by Aguirre can be found at her website: faculty.cua.edu/aguirre.