“Thomas More may have been killed unjustly, but his memory and his achievement lived on,” professor and author Dr. Gerard Wegemer told students and faculty on April 4, during a lecture entitled Thomas More on the Liberal Arts: How He Brought the Renaissance to England. This was the second talk in the college’s new Faith & Reason Lecture Series. 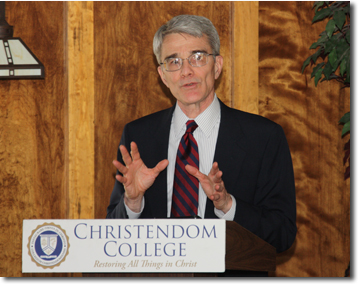 A professor in the English Department at the University of Dallas and author of several books on Thomas More, Wegemer presented More as an example for all who strive to be a positive force in their families and country. It was More’s dedication to self-cultivation and the liberty of the human person that made him the great man that he was, Wegemer said.  More believed that the liberty of a person or a nation is possible only with the cultivation of four major arts: the liberal arts, virtue, law, and rhetoric.

Wegmer said that the first of the arts, the liberal arts, was championed by More who was heavily influenced by the classical authors Seneca and Cicero.  More so highly valued the truth that the humanities played an integral part in the education and formation of the mind, that he dedicated himself to a life-long pursuit in the liberal arts. Yet, while liberal arts prepare you for virtue, the formation of a person’s character does not stop with them.

“Some of Hitler’s top advisors were educated in the liberal arts,” Wegemer said. “That’s why you need this second art, virtue. More presents virtue as an art since it is a self-fashioning according to an idea—according to an understanding—of the person that requires repeated constant personal effort. No one becomes virtuous by accident. You may be equipped for virtue by very good parents, a very good education, but everyone must choose if that is the path that [they] will follow.”

Wegemer described the third art, law, as guidelines for ones own life as well as for ones country.

“Good law is the work of wise and experienced fathers of their country arising from an intimate knowledge of its country’s character, history and customs,” Wegemer said. “What it’s capable of doing, what it has done, and what it might be able to do with proper leadership.”

Just as the mind needs to work to be truthful, accurate, clear, and follow through consequences, so the laws of a nation need to do the same thing, he said. The fourth art discussed by Wegemer was rhetoric or “all the available means of persuasion to move people to a common good.”

Wegemer and members of the faculty discuss More’s use of humor to present the truth.

“Because human beings are free and meant to rule themselves, rhetoric is the art that recognizes that the way of a civilized country is to use free persuasion, not political force,” Wegemer explained. “And this is why your education is so important. To be able to put in context—in the broadest context of nature, history, and God’s laws and man’s laws—what one can do for the common good and to bring the greatest measure of peace of justice that might be possible in your time.”

Self-cultivation in these four arts provides a conscious plan for each person and each nation to fashion themselves to experience true freedom or liberty, Wegemer said.

“More invites you and me to fashion ourselves in faith and reason—in liberal education—but enjoy that your strength of character will be the strong support that More has been for anyone facing situations as difficult or less difficult than he,” Wegemer concluded.

The Faith & Reason Lecture Series was born of the spirit of Faith & Reason, the academic journal of Christendom College. The mission of the journal and this series is to create an educated Catholic laity, a laity in love with all that is good, beautiful, and true.