Christendom College Players Bring The Merchant of Venice to Life

The Christendom College Players brought Shakespeare’s The Merchant of Venice to life at the Warren County High School Auditorium on April 8-10. 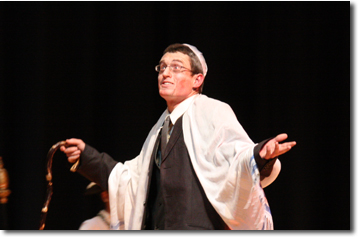 The play was dedicated to English Professor Dr. Patrick Keats, who not only performed a small role in Merchant, but also helped direct the play. His thirtieth theatre production at Christendom, Keats was joined by alumnus Mike Powell in assisting alumnus Peter Smith, the play’s primary director.  With costumes and sets mirroring the 1920’s, the play showcased Christendom’s dramatic talent as actors tackled the many stirring scenes and complex themes of the play.

“Merchant has just about everything one could ask for in a play,” Keats said. “We had some very colorful characters, such as Shylock, the devious moneylender, and the lovely Portia, who matches wits with him—a suspenseful courtroom scene, three sets of romantic lovers, and some of Shakespeare’s most beautiful verse.”

Keats also noted that Merchant has always been one of Shakespeare’s most controversial plays, sometimes called a “problem” comedy or a “tragicomedy.”

“Peter Smith brought out these darker elements, especially with the characters of Jessica, Shylock, and Antonio, all of whom are somewhat ostracized by the end of the play,” Keats said.

Seasoned Christendom player and senior Steven Curtin played the complex character of Shylock, the Jewish money-lender. His performance captured the passion, greed, and sorrow found in one of Shakespeare’s most famous characters. Freshman Matthew Harris, as the foolish Lancelot, and Keats, as Lancelot’s father Old Gobbo, filled the audience with laughter and gave a taste of professional Shakespearean theater.

Sophomore Olivia Aveni gave a very memorable performance as Portia, the young Venetian heiress. Her presence on the stage carried the great dramatic weight found in the play, particularly in the famous courtroom scene.

“I loved being able to participate in this show, especially since it was my first lead role in a Christendom performance,” Aveni said. “I think the theme of mercy as portrayed in the play is something very close to the Christendom community’s heart—and I hope that this show reinforced the message of true Christian mercy and justice for theatergoers.”

Junior Adele Smith, who played Salerino, found performing in the play to be an unforgettable experience.

“There’s nothing better than having months of hard work culminate in one spectacular weekend and knowing that you have helped to create something amazing,” she said. “It’s hard when it’s all over, but the memories are priceless, and I’ll be glad to do it all over again.”

The cast was largely dominated by freshmen, which bodes well for the future of Christendom theater.  However, three talented seniors gave their final performances for Christendom: Steve Curtin, Mary Harrington, and Liz Newcombe.