Christendom College will hold a one-week Latin Immersion Program this summer from July 17-24 for high school students who will be entering their junior or senior year of high school in the fall. Participants will spend close to three hours a day immersed in speaking Latin as a living language, taught by some of today’s leaders in teaching “active Latin.” 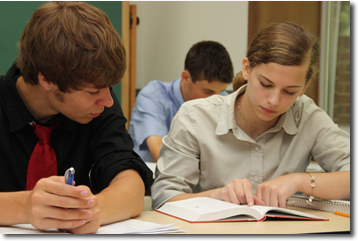 “The students have a great time. There is so much enthusiasm,” says Dr. Mark Clark, Christendom’s Associate Professor of Classical and Early Christian Studies who directs the program. “It’s great to see the students speaking Latin outside the classroom as well.”

Classes will be conducted by Clark and Dr. David Morgan of Furman University, whose Morgan Lexicon is well known to all those wishing to achieve fluency in Latin. The classes are similar to an intensive Latin kindergarten. Orberg’s Lingua Latina, as well as dialogues from fifteenth, sixteenth, and seventeenth century courses, is used. The Gospels are also used by mimicking the many conversations Jesus had with others.

“Students can expect to make substantial progress in active Latin, even in one week,” Clark says.

This year’s program is being totally revamped from past years and will be structured similar to the college’s widely popular “Experience Christendom” Summer Programs. The afternoons and evenings will be filled with recreational and social activities to give participants a feel for what life would be like being a student at Christendom College.

“The ability to come together with a bunch of Latin speakers in one place is something you don’t expect to find in 21st century America,” comments a past Latin program participant from California. “It was an experience that not only improved our Latin, but also built new relationships, strengthened our faith, and increased our knowledge.”
Clark started the program two years ago in response to what he sees as a serious need in the Church.

“The Church has a treasury of Latin literature spanning almost two millennia, which is now sitting like an unnoticed trunk in the attic,” he says. “Two generations ago, there were priests who knew Latin well enough to work on that tradition—the greatest historians of medieval theology in the twentieth century, for example, were priests and even bishops—but now only a handful survive.”

This, coupled with a failure by modern school systems to teach Latin, has created a dire need in the Church for those who can work fluently with Latin. Clark says that a sign of how bad things have gotten is that Vatican documents are written in the vernacular and then translated into Latin.

“And even that isn’t really Latin,” Clark says. “We are, in short, in real danger of being cut off from our own tradition. The need, therefore, is crystal clear. And it seems the best course to teach young people whose ideals are in the process of being formed, so that they may decide to serve the Church in this way.”