Christendom College will celebrate Commencement Weekend on May 13-15, 2011, and will honor the Most Reverend James Conley, Auxiliary Bishop of Denver, and Dr. Robert P. George, author and professor of Jurisprudence at Princeton University. Since its first graduation ceremony in 1980, Christendom College has honored outstanding individuals who have rendered faithful service to the Church and nation, and whose lives can be emulated by the graduates and the college community. This year’s invitees are no different. 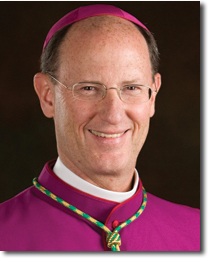 Bishop Conley will be the main celebrant and homilist at the Baccalaureate Mass on Friday, May 13, and he will be awarded an Honorary Doctorate during the commencement exercises. A native Kansan and a convert to Catholicism, Bishop Conley served as a priest for 23 years before his Episcopal Ordination, including 10 years of service to the Holy Father as an official in the Vatican Congregation for Bishops in Rome. He also served as adjunct instructor of theology for Christendom College’s Rome Campus from 2004 to 2006. Pope Benedict XVI appointed him auxiliary bishop of Denver in 2008.

“We’re delighted to have bishop Conley with us for commencement,” College President Dr. Timothy O’Donnell says. “My wife, Cathy, and I still remember our first meeting in Rome, where he taught for us for a number of years. I was struck by his personal warmth and his deep commitment to the education of young people. His tenure teaching our students in Rome is remembered with great fondness by those who had him in class and it will be joy to have him back at our college.”

Dr. Robert P. George will be awarded the college’s Pro Deo et Patria Medal for Distinguished Service to God and Country and will deliver the commencement address on May 14. Professor George has served on the U.S. President’s Council on Bioethics and as a presidential appointee to the United States Commission on Civil Rights. He is a former Judicial Fellow at the Supreme Court of the United States, where he received the Justice Tom C. Clark Award. Currently he serves on UNESCO’s World Commission on the Ethics of Scientific Knowledge and Technology. He is the author of In Defense of Natural Law, Making Men Moral: Civil Liberties and Public Morality, and The Clash of Orthodoxies: Law, Religion and Morality in Crisis. Professor George is a recipient of the Presidential Citizens Medal and many other honors.

O’Donnell says that it will be a joy to honor George as well.

“Dr. George has made an outstanding contribution to the Catholic intellectual life here in our country,” O’Donnell says. “It will be an great moment for our graduates to be exposed to such a powerful example of a man who takes his faith and lives it in the public square.”

One associate of arts degree will be awarded to Bethany Hepler.