“The art made by Christians today is not only not beautiful, but tends to be among the ugliest art that mankind is producing,” screenwriter and professor Barbara Nicolosi-Harrington said during her talk to the students and faculty of Christendom College on May 2. Nicolosi’s talk, entitled Why Hollywood Matters, explored the challenges facing Christians in the art of cinema and the art in churches. 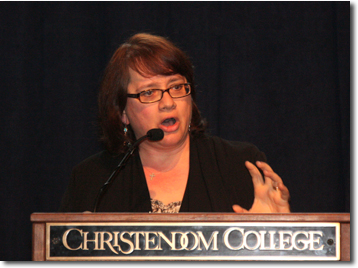 “We have sacrificed the beautiful to other things,” she said. A professor at Pepperdine University, Nicolosi is the founder of Act One, an organization that seeks to nurture the next generation of Christian artists and media pioneers. She was a theological consultant for The Passion of the Christ and she co-edited Behind the Screen: Hollywood Insiders on Faith and Culture. Her latest screenwriting project is Mary, Mother of the Christ, which stars Al Pacino and Peter O’Toole and will be released in 2012 by MGM.

Quoting Pope Benedict XVI, Nicolosi said, “considering the music that is in use in most Catholic Churches today, we have to conclude that the People of God are afflicted with the cult of the banal.”

She explained that the traditional philosophical definition of beauty is the combination of wholeness, harmony, and radiance.  “That eliminates cute, pretty, facile, puerile, and banal,” she said. “If it is easy, it is not beautiful. But, if when you encounter it, something in your spirit yearns… you feel deeply touched on your most human level—you’ve encountered the beautiful.”

In order to perceive beauty a person needs three things: sensitivity—somewhat free of prejudice and fear, intelligence—as opposed to ignorance, and imagination—to allow one’s history to combine with the artist’s communication, she said.

Nicolosi also explained that egalitarianism, politics, and consumerism or cheapness have caused a loss of beauty in the art found in churches today. To illustrate the point, Nicolosi told the story of a tour she took of the new cathedral in Los Angeles. On the tour she was shown a statue of Our Lady Queen of the Angels, which was described as androgynous and combining all different types of people and features from different races.

“I raised my hand wearily and said, ‘You know, it’s kind of ugly,’ to which [the tour guide] said, ‘Uh, the Church isn’t about that anymore. The Church is about every one feeling welcome by including them in the statue.’ Now it begs the question whether Asian people look at the Pietaand go, ‘That’s nice for the white folks,’” Nicolosi quipped. “They were not going for wholeness, harmony, and radiance here. They were going for agenda, so they sacrificed the beauty because of the political point.”

Nicolosi also related a study done on the three most prominently used hymnals in the Catholic Church in America. The study found that less than 25 percent of the composers in the hymnals had any musical training.

“That is awful,” she said. “We’re singing music that Barney would reject.”

Many students and faculty lingered after the talk to discuss the topic further with Nicolosi.

While the Church was once the patron of the arts, the pagans in Hollywood now hold that position, she said. “Why do we love the movies so much? The movies are the combination of the four classical art forms: literature, performance, music, and composition. They are the art form of our time.”

Nicolosi challenged students to get involved in the arts, but especially cinema. “Should you not be one of the people—out of compassion and creativity—talking to the people of your time,” she said. “I know you have the talent. What’s keeping you back? Fear? Laziness?”

Concluding, Nicolosi asked for prayers for her work in Hollywood, for artists, and for the Church. “We need to get this together, because it was a very bad idea that the Church not be with the arts in the twentieth Century.”