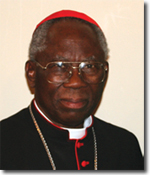 Christendom will host a one-day conference on Catholic Bioethics on Saturday, July 9, 2011, on its Front Royal, VA, campus. With College President Timothy O’Donnell as emcee, the conference will feature world-renowned theologians Francis Cardinal Arinze, Dr. Janet Smith, Fr. Tadeusz Pacholczyk, and Bishop Robert Morlino, with a Q&A panel of the speakers at the end.

Francis Cardinal Arinze is Prefect Emeritus of the Congregation of Divine Worship and the Discipline of the Sacraments. He has served on the Pontifical Council for Interreligious Dialogue and Committee of the Great Jubilee of the Year 2000. He is a long time defender of the family and outspoken opponent of contraception, abortion, and euthanasia, as well as a frequent guest on Christendom’s campus. He will speak on “Who is Man? The anthropological foundation for Catholic Bioethics,” and be the main celebrant and homilist at the mid-day Mass.

Bishop Robert Morlino is the Bishop of Madison, WI. He holds a BA in Philosophy from Fordham University, an MA in Philosophy from the University of Notre Dame, an MDiv Degree from the Weston School of Theology in Cambridge, MA, and an STD in Moral Theology from the Gregorian University in Rome, with specialization in fundamental moral theology and bioethics. Bishop Morlino has served as chairman of two committees within the United States Conference of Catholic Bishops (USCCB) – the Bishops’ Committee on the Diaconate, and the Ad Hoc Committee on Health Care Issues and the Church. Since 2005, Bishop Morlino has served as Chairman of the Board of Directors of The National Catholic Bioethics Center (NCBC), which conducts research, consultation, publishing and education to promote human dignity in health care and the life sciences. He will speak on natural law and its role in end-of-life decisions.

Dr. Janet Smith holds the Father Michael J. McGivney Chair of Life Ethics at Sacred Heart Major Seminary in Detroit. She is the author ofHumanae Vitae: A Generation Later, and editor ofWhy Humanae Vitae Was Right: A Reader. She is a Consultor to the Pontifical Council on the Family and has appeared on the Geraldo show, Fox Morning News, CNN, and EWTN. Her talk will focus on contraception.

Rev. Tadeusz Pacholczyk is a priest of the diocese of Fall River, MA. He is Director of Education for The National Catholic Bioethics Center in Philadelphia and directs the Center’s National Catholic Certification Program in Health Care Ethics. As an undergraduate, he earned degrees in philosophy, biochemistry, molecular cell biology, and chemistry. He later earned a PhD in Neuroscience from Yale University, where he focused on cloning genes for neurotransmitter transporters, which are expressed in the brain. He worked for several years as a molecular biologist at Massachusetts General Hospital/Harvard Medical School. Fr. Pacholczyk studied for 5 years in Rome where he did advanced work in dogmatic theology and in bioethics, examining the question of delayed ensoulment of the human embryo. He has testified before members of the Massachusetts, Wisconsin, Virginia, and North Carolina State Legislatures during deliberations over stem cell research and cloning. He has given presentations and participated in round tables on contemporary bioethics throughout the US, Canada, and in Europe. He has done numerous media commentaries, including appearances on CNN International, ABC World News Tonight, and National Public Radio. He will give a presentation on embryonic stem cell research.

Those interested in taking advantage of “early-bird” discounted rates and saving $15 per person may register online prior to June 1. All students, Christendom alumni, DREs, priests, and religious will receive special discounts.