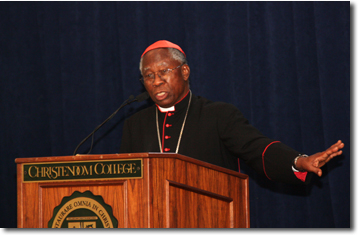 Cardinal Arinze, a long time defender of the family and outspoken opponent of contraception, abortion, and euthanasia, launched the conference. Examining the anthropological foundation for Catholic bioethics, he said that fundamental human rights are inviolable because they are given by God and are inherent in the human person.  The Cardinal said that of these human rights, the right to life deserves special attention.

“If a person is killed, of what use are all the other rights to him or her?” he asked. “Some people say, ‘I am personally opposed to abortion, but I will not impose my view on others.’ It is like saying, ‘Some people want to shoot all of you in the Senate and the House of Representatives, but I won’t impose my views on them. It’s pro-choice for them.’”

Prefect emeritus of the Congregation of Divine Worship and the Discipline of the Sacraments, Cardinal Arinze called abortion an “unspeakable crime.”

“This is Divine law, it is not a tennis club regulation,” he said. “Is it not highly illogical for some people to talk of some whales, and the chimpanzees, and trees as ‘endangered species’ which must be preserved – and if you torture a dog in some countries you will be brought to court for your cruelty to animals – while the killing of unborn babies is labeled ‘pro-choice’ instead of what it is: murder? Call a spade a spade.”

Author and speaker Janet Smith then addressed the topic of contraception. Using the philosophy of personalism found in Blessed John Paul II’s Theology of the Body, Smith explained the damaging effects of contraception on the marital relationship.

“To have marital relations with a person and to not be open to having a child with that person would be to deny the reality that sexual intercourse leads to lifetime relationships,” she said. “This is meant to be something that you rejoice in, not as something you see as a punishment for having marital relations.”

Smith, who has appeared on the Geraldo show, Fox Morning News, CNN and EWTN, explained that if the possibility of parenthood is excluded from marital relations, the character of the relationship between the partners automatically changes. It changes away from the unification in love and in the direction of mutual or rather bilateral enjoyment.

Smith also said that John Paul II called on those who partake in the marital act to be conscious of the fact it might not only make babies, but it might also make parents of those who are engaging in it.

Following Smith’s talk all gathered in Christ the King Chapel for a Votive Mass for the Family, celebrated by Cardinal Arinze.

After Mass, Rev. Tadeusz Pacholczyk, Ph.D., of the National Catholic Bioethics Center addressed the issue of embryonic stem cell research. He explained that when a stem cell is taken from an embryo, the embryo is destroyed.

“Human life is under attack at the earliest stages of its existence,” he said.

Rev. Pacholczyk pointed out that not only is the practice immoral, it is also fruitless. Countless treatments have been developed with the use of adult stem cells, while no treatments have come from embryonic stem cells. Hollywood hype, scientific curiosity, and lucrative research patens are what keep the destruction of embryos for stem cells funded and active, he said.

Bishop Robert Morlino of Madison, Wisc., followed Rev. Pacholczyk with a presentation on the natural law and end of life discussions.

“Every case of a terminally ill or close-to-natural-death person is unique,” Bishop Morlino said, “and somebody has got to get in there with the physicians and know the whole story.”

The Bishop explained that before any discussions begin about what to do with a person who is terminally ill or near natural death, one must get all the facts, not only from the physician, but also from the local priest.  Then, once all the facts are known, an assessment can be made.

“The assessments are not that hard to make,” Bishop Morlino said. “It’s the pastoral communication that is so difficult. If the person does not feel like a burden in anybody’s eyes and is not a burden in anybody’s eyes, the pastoral approach to the communication of the truth is much easier. To prepare for decisions for the terminally ill, the first thing to do is to appreciate them long before that moment arrives. And treasure them, so that they needn’t wonder, ‘what’s going to happen to me’ and ‘what do these people really have in mind.’”

“In our society 80% of women have been on birth control pills. If you are over 35 and have one child there is a 50-60% chance that you’ve been sterilized, and the rate of IVF pregnancies just goes up and up every single year,” Cvetkovich said. “We have a lot to contend with.”

She explained that Catholic medical professionals do not only need to worry about the reproductive health issues, but good business and research practices. A challenge for the medical profession is to understand and recognize when ideology has trumped our scientific ideal.

“A lot of data and research has shown that abortion does increase the risk of breast cancer,” she said. “Why is there this cover up? In the past we could trust that people had the intent to do good research.”

Concluding Cvetkovich said that she fears for the future of Catholic medicine. “We will have the choice to either practice anti-Hippocratic, pro-choice type medicine and keep our jobs or practice Hippocratic, Catholic, pro-life medicine and lose our jobs.”

Rev. Pacholczyk responds to a question during the Q&A moderated by Dr. O’Donnell following the presentations.

College President Dr. Timothy O’Donnell, who emceed the event, was pleased with the conference and thought it was a a great success.

“This conference gathered some of the great minds and leaders in today’s cultural war,” O’Donnell said. “Everyone who attended was able to learn about the great challenges in bioethics that we face on the national and international levels.  Christendom is renowned for being faithful to the teaching authority of the Church, so attendees knew they would receive clear and solid answers to some very complicated issues. And they did.”

The talks from this conference, including an insightful Q& A session that followed the talks, are available through National Media Services (nationalmediaservices.com or 540.635.4181).