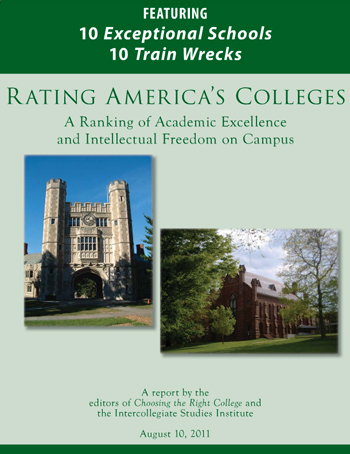 Christendom College is ranked as one of the top-ten colleges in America in a new report by the Intercollegiate Studies Institute (ISI). Other schools to make the top ten list include Princeton University, University of Chicago, The United States Military Academy at West Point, Providence College, and Texas A&M.

“As a college dedicated to the pursuit of wisdom through the liberal arts, it is an honor to be ranked in this report along with other such institutions of higher learning,” College President Dr. Timothy O’Donnell said. “It is a testament to the commendable work of our outstanding faculty, the excellence of our academic program, and the high caliber of our students. It reveals that a dedicated search for the Truth—discovered through faith and reason—cannot be replaced by a meandering through social trends and political correctness.”

The report, entitled Ranking America’s Colleges, judged the schools on how well they provided “the classic ‘liberal education’ suited to a free citizen and a well-rounded adult.” The report hopes to inform consumers, educators, and donors to the best and worst trends in American education.

In the assessment of the schools the report asked:

Are [students] being challenged to stretch their cognitive abilities in different fields, so they’ll be intellectually and professionally versatile adults? Are they learning the basics of core disciplines such as American history, democratic government, English literature, and the market economy? Are they engaging with a wide range of freely expressed opinions on key ethical and political issues they will face as individuals and as citizens? Are they living in safe and sober residences where academic work is encouraged, not inhibited?

The report also emphasizes the importance of a liberal arts education in today’s economy. Citing the Bureau of Labor Statistics, it says that workers go through an average of eleven different jobs by the time they reach age forty-four.

“Many workers must change careers, as industries decline or are transformed by technology and outsourcing,” the report says. “The cognitive flexibility and intellectual curiosity developed by a true liberal arts education is the central prerequisite for a full, productive, and satisfying life.”

“Our alumni stand as proud witnesses to how a liberal education can lead to a full, productive, and satisfying life,” Director of Admissions and Alumni Relations Tom McFadden says. “The college has alumni leading in a myriad of career fields—law, medicine, politics, religious life, business, internet technology, journalism. Name a field and we’ve got a leader there who is a well-educated Catholic living the Faith.”

The report described Christendom students as “intellectually and morally serious” that enjoy class discussions, which typically spill over into “long conversations over coffee.”

“All students complete a rigorous Catholic core curriculum covering Western civilization before choosing a major in classical and early Christian studies, English, history, philosophy, political science and economics, or theology. The school sticks to its specialties, so each of these majors is strong,” the report continues. “Instead of political correctness, there is an absolute expectation of Catholic orthodoxy.”

For more information about the report visit ISI’s CollegeGuide.org.