Students Immersed in the Art and Architecture of the Eternal City

In two weeks, 37 students will fly to Italy to begin Christendom’s Semester in Rome Program. For many students it is a life-changing experience that will be a highlight of their four years at Christendom. The program is unlike many other study-abroad programs for a number of reasons. First, students live and learn in the heart of Rome itself, within 10 minutes of the Vatican. Second, the students pay a mere $1000 in “Rome Fees” above and beyond their tuition, room, and board costs associated with attending Christendom. Third, the College has a close relationship with the Holy Father and many Cardinals and dignitaries in Rome. And fourth, Christendom attracts high quality professors to teach in the program. 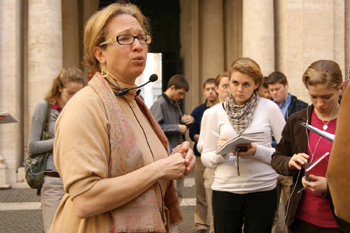 Prof. Liz Lev leads a tour during the 2011 Spring Semester in Rome.

While in Rome for the semester, the students take four classes: Moral Theology (or Apologetics, depending on which semester they travel to Rome), Roman Perspectives, Italian, and Art and Architecture.

When first asked to become part of Christendom’s Semester in Rome Program, Lev was a little hesitant, due to her other teaching commitments. But the College’s administration and Rome team were persistent in their desires to have her come on board.

“I feel like I was courted—there’s a feeling of an extended sort of romantic story,” she says. “I was asked to do one lecture, then, maybe two, then, maybe I could do a couple little things interspersed in the College’s course. And then a year and a half ago now, I was structuring a series of lectures. I’ve never felt this courted as I have at Christendom! It is in every way a very gentlemanly program. The students are always so elegantly dressed, they’re always so elegantly mannered, and even the way the College entices its professors is very genteel.”

According to Lev, one of the deciding factors with this courtship with Christendom was her experiences with its students.

“First of all, they present themselves exquisitely. For a professor, it’s really nice to be the one walking around with the group of students that always looks so great and so attentive,” she says. “But what I think is really interesting about this group is the literary background. I find it very refreshing and extremely pleasant to be able teach students with whom I have a common literary background. The more programs I teach, the more college students I come in contact with, the more I see the idea of great literature and the structure of great literature becoming rarer and rarer. And unfortunately the most important works of art, the works that everyone is interested in, are always grounded in some sort of literary background. The thing that the artist accomplishes in the Renaissance era that carries through to the Baroque and into the eighteenth century is that the artist becomes literate. The way I came to art history was through a love of reading these epic stories in mythology and then finding these pictures and the engagement between the two of them. So I have to say one of the things I appreciate the most about Christendom students is that they’re so literate! It’s really wonderful.”

Lev believes that studying art is very necessary and important because it has a tremendous power over people.

“When you live next door to the Vatican, you see the tremendously long lines of people every day waiting to get into the Vatican Museum to go look at the art. So obviously art has a huge impact on people; they want to experience it. But the art that people are interested in—the art of the Renaissance with people like Michelangelo, Rafael, Bernini, Caravaggio, Giotto, and Donatello—requires a little bit of understanding. And so I think it is particularly important for Christian students to know art, because that art was made for them. It was made to find ways to cast glorious lights on your body of faith.”

One of the benefits of studying art while in Rome is that one may see everything in its context. Unlike seeing a beautiful piece of art in a museum, when you see the piece of art, in its original place, where the artist intended his piece to be seen, it makes a world of difference.

“When you see Caravaggio, let’s say the St. Matthew cycle in San Luigi de Francesi, and you see how the light in the painting comes in through this space of the altar, when you see how Matthew is called toward the space of the altar, and at the end of his life he’s called up toward the space of the ceiling; or when you see Michelangelo’s Pieta sitting above an altar with the body of Christ looking like it’s going to fall on the altar––these elements of art make the art alive, they make it live,” she says. “You need to see it where it was made, and then to see that this faith is not something that’s dead, as it is frequently presented to you—this mythology of Christianity. You sit next door to where you see tens of thousands of people every Wednesday come to see the successor of St. Peter. So it’s living. It is not a dead church; it is a living church and the art lives through it.”