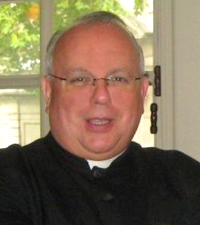 Renowned theologian Msgr. Andrew R. Wadsworth will deliver a talk to the students and faculty at Christendom College on September 19, 2011 at 6:00 p.m. as part of the college’s Major Speakers Program. The talk, entitled The Making of the Missal, will address the role of the International Commission on English in the Liturgy (ICEL) in producing the new translation of the missal of the Roman Rite.

Since March of 2009, he has served as the Executive Director of the ICEL located in Washington D.C. There, he has worked to prepare English translations of the Latin liturgical books and texts in accord with the directives of the Holy See.

A priest of the Archdiocese of Westminster, England, Msgr. Wadsworth holds Masters degrees in Italian, music, and theology. He has taught Latin, Greek, and Italian and speaks Italian, French, Spanish, Portuguese, and German.

From 1997 to 2009, Msgr. Wadsworth served as the Head of the Italian Department and the Chaplain at Harrow School, England. Since 2003, he has served as the chaplain to the Society of St. Catherine, an apostolate in support of Catholic theologians engaged in academic work. He has taken a leading role in England in promoting the worthy celebration of the liturgy in both the ordinary and extraordinary forms of the Roman Rite. Since the promulgation of the motu proprio Summorum Pontificum, he has directed two summer schools at Merton College Oxford to enable diocesan clergy to become more acquainted with the Extraordinary Form of the Roman Rite and to explore some of the pastoral issues it raises. An accomplished musician, he has helped run a choir which concentrates on liturgical music and has sung at many parishes throughout Westminster and beyond, as well as in Malta, Rome, Venice, Florence, Palermo, Vienna, and Salzburg.

He is the author of numerous articles and books including A Marian Theology of the Priesthood, Discovering the Riches of the Extraordinary Form, and Holy Scripture, and Liturgy and the Presence of Christ.

For more information about the ICEL, please visit www.icelweb.org.