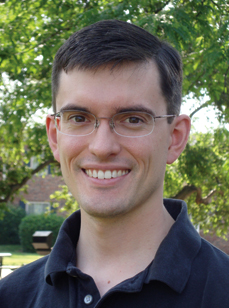 Dr. R.J. Matava, a new full-time professor at the Christendom Graduate School, attended four conferences this year and presented papers at two of them.

“I was excited to have the opportunity to meet other people in the field and also to receive feedback on my research,” Matava said. “I’ve learned that sometimes the most valuable part of a conference is the coffee break. There you have the opportunity to meet other scholars who, in a matter of minutes, can open a significant door for your work by their suggestion of a particular source or idea.”

At the International Medieval Studies Congress in Kalamazoo, Michigan, Matava presented a paper on the topic of “Truth, Existence and Aquinas’ Theory of Adequation: Implications for the Middle Knowledge Debate.” The essay brought to light a sixteenth-century prototype of the “Grounding Objection” before exploring Thomas Aquinas’ theory of truth as the adequation of intellect and thing, and what this theory brings to the current debate about groundless truths, especially counterfactuals of creaturely freedom.  The session was organized and sponsored by the Center for Medieval Philosophy at Georgetown University, where Matava is a fellow this year.

A month later, Matava traveled back to the north Midwest to attend Marquette University’s annual Summer Seminar on Aristotle and Artistotelianism.  This year’s theme was “Causation, Motion and Change in Aristotelian Physical Science.” Matava’s paper, titled “Aristotelian Premotion and the Divine Causation of Human Free Choices,” analyzed Bernard Lonergan’s readings of both Thomas Aquinas and Domingo Báñez on God’s movement of the human free will.

Additionally, Matava attended the Thomistic Circles symposium on “St. Thomas Aquinas and the Church: Theo-centric Ecclesiology” at the Dominican House of Studies in Washington DC this past April.  In late June, he participated in the inaugural “Thomas Aquinas and Contemporary Philosophy” workshop at Mount Saint Mary College in New York.

Matava’s research and conference experience enriches his teaching at Christendom.

“The work I’ve done for both essays has contributed directly to my teaching, particularly my theology of God course, where we discuss divine providence and evil,” he explains.

“People often juxtapose teaching and research,” he says, “but I prefer to see them as parts of a whole: research enables me to bring the ‘fruits of contemplation,’ as Thomas would say, into the classroom. The more I grow in my own understanding, the more I can bring to my students. At the same time, I have gained valuable insights for my research by engaging with students in the classroom.”