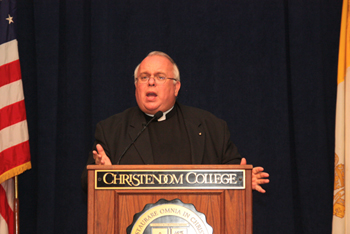 Theologian Msgr. Andrew R. Wadsworth delivered a talk, entitled The Making of the Missal, to the students and faculty of Christendom College on September 19. Msgr. Wadsworth, the Executive Director of the International Commission on English in the Liturgy (ICEL), examined the role of the Commission in producing the new translation of the missal of the Roman Rite.

At ICEL, Msgr. Wadsworth has worked to prepare the English translations of Latin liturgical books and texts in accord with the directives of the Holy See. He is a priest of the Archdiocese of Westminster, England, and has taken a leading role in his country in promoting the worthy celebration of the liturgy in both the ordinary and extraordinary forms of the Roman Rite.

“A frequent observation made in relation to the new translation is that it is more formal,” Msgr. Wadsworth said. He clarified that the formal language was used to reflect the quality and the characteristics of the original Latin text. It also avoided the regional differences, which are found in the English language when it is used colloquially.

“The difference that we have in our language, when we use it in an everyday way, does not exist to the same level when we move everything up a notch,” he said. “When we move everything to a more formal register of the use of English, then we have a language that is common across regional and national boundaries.”

Wadsworth read an example of the original Latin text from the missal and then two versions of a translation—one from the current missal and one from the new missal.

“I would suggest that if we were to characterize those two different approaches, the current translation is a bit flat,” he said. “The ideas are there, but they’ve sort of been squashed. In the new translation, they are re-inflated. They have something of the natural balance that is evident in the Latin. The phrases balance each other perfectly, the ideas are well presented, and you get a greater sense of what the prayer is about.”

Msgr. Wadsworth also explained the process of achieving the new translation, which will be implemented in the United States on November 27, 2011.

“The bishops are involved in every stage of the production of this text,” he said. “Great care has been taken in the preparation of something which is so precious to us.”

He said that a base translator, who is accomplished in both linguistics and theology, initially translates each text. That translation is then evaluated by a team of four bishops, who present the text to the 11 bishops who serve on ICEL. The text then goes to the 11 conferences that those bishops represent. There, comments and recommendations are made, after which it is sent back to ICEL. ICEL makes adjustments to the translation and then it goes back to the 11 conferences for review. With a 2/3-majority vote, it is approved and sent to the Holy See.

Many students and faculty lingered after the talk to discuss the topic further with Msgr. Wadsworth.

Msgr. Wadsworth, an accomplished musician and leader of a choir that performs internationally, also noted that the new Missal contains more music that any other Missal in the history of the Church.

“The music is Gregorian chant—with which I believe you are familiar,” he said with a smile. “The Latin and the English sometimes appear side by side, which is a powerful way to reinforce that the singing of chant in Latin is perfectly alright in an English celebration of the Mass.”

He went on to encourage students in their study of Latin, saying that the language is the “matrix” of much of western civilization and even more so of the Church—particularly with sacred liturgy.

“The number of men and women who have the necessary command of the language is pitifully small at the present. It has dwindled,” he said. “You are part of the new wave that’s going to produce a new generation of scholars that will have not only these skills, but the sensibility to understand what the liturgy is about because you’ve been formed with Catholic theology. It is not sufficient to be a linguist. You have to be a linguist who understands the theology of the liturgy and who understands the truest purpose of the liturgy.”

Concluding, Msgr. Wadsworth said that the purpose of the production of the English edition of the Missal—and the guiding purpose in all of ICEL’s activity—is to create a dignified celebration of the sacred liturgy enabling all people to come to a greater experience of the saving mysteries that are celebrated.

“In that respect the goal of ICEL and Christendom College is essentially one and the same,” he said.

This timely and informative lecture can be downloaded at Christendom on iTunes U.

This lecture was part of Christendom College’s Major Speakers Program. An important aspect of the academic life at the College, the program seeks to offer the students and community an opportunity for cultural, intellectual, and spiritual enrichment beyond the classroom. Through the program, students are given the opportunity to gain greater insights and depth of understanding of important issues, and to interact personally with a wide range of men and women who are shapers and critics of our society.