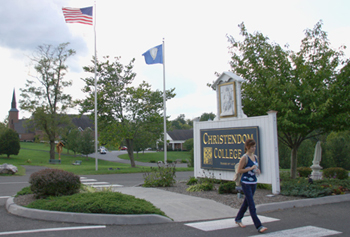 Christendom College, known throughout the world for its faithful adherence to the teachings of the Magisterium of the Roman Catholic Church, joined seventeen other Catholic colleges and universities and The Cardinal Newman Society in an appeal to the Obama administration to exempt all religious objectors from a mandate requiring health insurance plans to cover sterilization and contraceptives—both of which are contrary to Catholic Church teaching.

“It is very troubling that our government, which claims to believe in freedom and tolerance, would take such a draconian measure,” Christendom College President Dr. Timothy O’Donnell said. “This mandate violates the natural rights of conscience and should never be forced upon Catholic institutions of higher learning.”

The appeal was organized by The Center for the Advancement of Catholic Higher Education, a division of The Cardinal Newman Society (CNS), and authored by attorneys Kevin Theriot and Matthew Bowman of the Alliance Defense Fund. Joining the Center and 18 colleges in the letter were the Society of Catholic Social Scientists and Auxiliary Bishop Thomas Curry of the Archdiocese of Los Angeles. Bishop Curry, who signed in his individual capacity, is chairman of the Committee for Catholic Education at the U.S. Conference of Catholic Bishops.

“This health insurance mandate is potentially very damaging to Catholic higher education, both in its immediate impact on the moral climate of colleges and universities and its broader implications for the Constitutional rights of religious employers,” said Msgr. Stuart Swetland, Executive Director of the Center for the Advancement of Catholic Higher Education and Vice President for Mission at Mount St. Mary’s University in Emmitsburg, Md.

On September 14, The Cardinal Newman Society urged more than 230,000 e-mail recipients to send comments to the Department of Health and Human Services (HHS) opposing the mandate.

“[W]e urge HHS (and the Departments of Labor and of the Treasury that jointly issued the interim final rule) to exempt all stakeholders with a religious or moral objection to ‘contraceptives’ (including abortifacients as well as non-abortifacient mechanisms of action), sterilization, and related education and counseling, from having to provide, offer, pay for or in any way participate in health insurance that includes such coverage. The right to religious freedom requires no less,” the letter to the Obama Administration reads.

The letter cites the official summary of the mandate, in which HHS acknowledges “that one reason it was rushed to finalization prior to the notice and comment period was precisely to ensure that collegiate women would have access to ‘contraception,’ abortifacients, sterilization and the like as quickly and as freely as possible.” The mandate will likely force Catholic colleges to include such coverage in student health plans.

The comment also suggests the frightening possibility that the mandate could be used to require insurance coverage for future abortion drugs as long as the Food and Drug Administration declares them to be “contraceptive.” The mandate already includes drugs that may cause early abortions, in violation of various federal laws, including ulipristal (“Ella”).

Together the Catholic colleges, Catholic higher education groups, and Bishop Curry call on HHS to issue “a blanket, non-discretionary exemption from the Mandate for any employer, issuer, payer, individual, or entity who in his or its own determination has any religious or moral objection to providing, issuing, enrolling in, participating in, paying for or otherwise facilitating or cooperating in coverage of any required practice or of any required provision of information.”

“I commend The Center for the Advancement of Catholic Higher Education for taking a leadership role,” O’Donnell said. “We are honored to add our voice to this cry for fundamental justice.”