Dr. Sebastian Carnazzo’s doctorate is in Biblical Studies from the Catholic University of America. Before attending CUA, Carnazzo earned his Master of Arts in Theological Studies degree from the Christendom Graduate School. He started teaching at Christendom while still a graduate student at CUA, and continues to teach at Christendom’s Summer Program when he is available. His full-time job is teaching Scripture courses and Biblical languages at Our Lady of Guadalupe Seminary in Denton, NE, a seminary of the Priestly Fraternity of St. Peter. 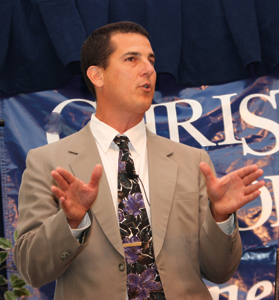 Dr. Carnazzo’s dissertation, Seeing Blood and Water: A Narrative-critical Study of John 19:34, assessed the history of that passage’s interpretation, its literary structure, and the theological significance of the images of blood and water pouring from Jesus’ side on the cross.

Carnazzo is a popular professor because of his engaging teaching style, his breadth and depth of Scriptural knowledge, and his commitment to the faith and to his students. His goal is to help his students to form “a closer relationship with Jesus Christ through study of the Sacred Scriptures and biblical languages.” Even after they graduate, several graduate students have been known to return to take another course taught by Carnazzo.

Sienkiewicz began teaching for Christendom during last year’s Summer Program, when he taught New Testament. This past spring he taught Christology and he is the professor for the online version of that course. His “day job” is teaching world history and Latin at John Paul the Great High School in Dumfries, VA. He, too, is a very dynamic professor who keeps his students engaged in class. 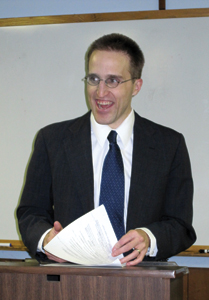 “No one falls asleep or even gets distracted while he is lecturing,” says one student. “Nor is it just academic – you can tell he really wants us to believe and to love Christ and to be saved.”

Sienkiewicz’s doctoral thesis is titled The Eucharist and Salvation in the Thought of Saint Thomas Aquinas. It argues that “ultimately for Aquinas, one’s salvation rests on being incorporated into the Mystical Body of Christ, which is the Church.”

During his graduate studies, Sienkiewicz was a Project Specialist for the US Conference of Catholic Bishops where he worked on ensuring the quality and orthodoxy of catechetical materials for use in Catholic schools. He also oversaw the founding of the Bishop Helmsing Institute for adult faith formation in the Diocese of Kansas City – St. Joseph.

Professor Joseph Arias is also an alumnus of the Christendom Graduate School, having earned his MA in Theological Studies degree in 2003. Shortly after graduating, Arias began working at the Graduate School’s St. Paul Library, where he helps students and faculty alike find the resources they need for their research. He has been teaching at Christendom, for both the undergraduate theology department and the Graduate School, since 2006. 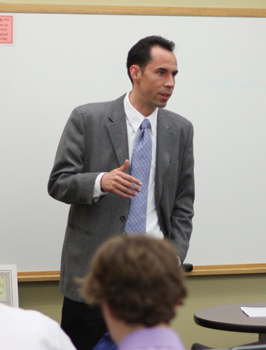 After earning the MA, Professor Arias switched tracks to earning the Church’s ecclesiastical degrees in the sacred sciences. He enrolled in the Faculty of the Immaculate Conception at the Dominican House of Studies in Washington, DC, where he earned the STB (Baccalaureate of Sacred Theology) in 2009. In the last two years, he has met the requirements for the STL (Licentiate in Sacred Theology) including further coursework and the writing of a thesis, a portion of which was published in the summer issue of the National Catholic Bioethics Quarterly. A further requirement of the licentiate degree (which is a “license” to teach in any Catholic seminary) is the lectio coram, a talk delivered to the faculty on a topic announced only one day earlier. Professor Arias waxed eloquently for forty-five minutes on the doctrine of “no salvation outside the Church” and was then questioned by his professors for another forty-five minutes.

Professor Arias has taught several courses at the Graduate School, including Introduction to Theology, Moral Theology, Holy Spirit and Ecclesiology, and Sexual/Biomedical Ethics. He is the professor for the online versions of the first three of these. For the undergraduate program, he has taught both semesters of Catholic Doctrine, both Old and New Testament, Moral Theology, and Bioethics. Students love his comprehensive knowledge, attention to theological detail, and willingness to answer questions in class even if it means getting off the topic. He is reputed to have an answer for any question put to him, no matter how obscure, or at least to return the following class period with an answer that he has researched.

This fall, Arias begins the last segment of his scholarly journey: he begins coursework at the Catholic University of America to complete the STD or Doctorate of Sacred Theology in the field of moral theology. With only one more year of classes required, and allowing one year for the dissertation, he hopes to complete this degree in 2013.