Christendom Players Have Audiences Rolling with Laughter During Room Service

The Christendom College Players performed Room Service on November 11-13.  A comedy about show business, the Players captured the zany humor of the 1930’s Broadway play with colorful characters and witty lines delivered at a breakneck speed.

Dr. Patrick Keats, a professor of literature and experienced producer of plays at Christendom College, directed the production and was assisted by College alumna Mary Harrington, as well as students junior Kelly Lawyer and senior Brianna Miller. 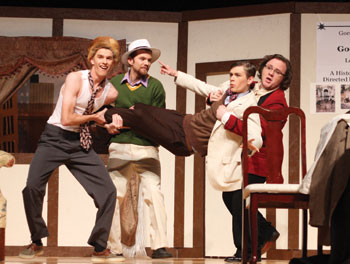 “The energy of the play’s characters was certainly matched by the enthusiasm of our cast, which included many freshmen,” Keats said.  “We had a great time and lots of laughs at rehearsals, and I think that enjoyment was passed on to our audiences.”

Room Service tells the story of an energetic, but short-on-money, young producer who is anxious to put on a play, entitled Godspeed, which he expects to be a huge success. Despite having no money, the producer uses his connections with his brother-in-law, a hotel manager, to put up his entire cast and crew for no charge. All is well until Wagner, the tyrannical hotel supervisor, starts putting on pressure. 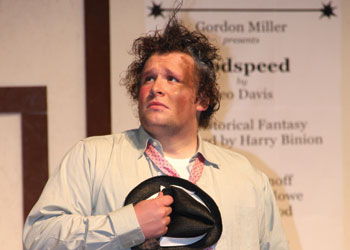 Freshman Stephen Hyland gave a great performance as the brilliant but naive playwright and will certainly be an asset to future Christendom Player productions. Freshman Katie Brizek played the playwright’s sweet and idealistic girlfriend with a charm and energy that was matched only by sophomore James Ciskanik, who played the flamboyant Russian actor. Freshman Rob Delancey brought the fire-breathing hotel supervisor to life. Freshman Zack Moody, played the wacky young producer with great polish and had great chemistry with the impulsive director, played by Sophomore Mike Heffernan. 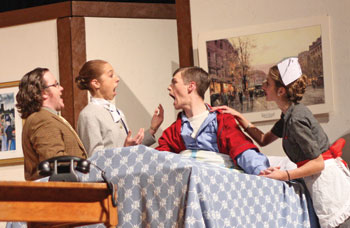 “This is definitely one of the most satisfying performances I’ve been a part of,” Heffernan said following the performances. “Having the audience entertained and laughing makes for a gratifying experience.”

Freshman Katie Brizek had a great time being in the play as well.

“It was a great experience,” she said. “I love theater because it’s a great way to get to know people you otherwise wouldn’t have met. Everyone in the cast and production team was amazing and I had a lot of fun.”