The United States Collegiate Athletic Association (USCAA) awarded seven Christendom College students the Fall 2011 USCAA All-Academic Award for excellence on and off the court or field. These students maintained above a 3.5 GPA and showed skill and leadership in their sports.

“These individuals stand as a great example of what is possible here at Christendom,” Christendom’s Athletic Director Chris Vander Woude said. “Students can achieve excellence in the classroom in addition to playing an important role on their individual sports team. I would like to personally thank and congratulate these student athletes for their hard work, dedication and example—especially in the last few months.” 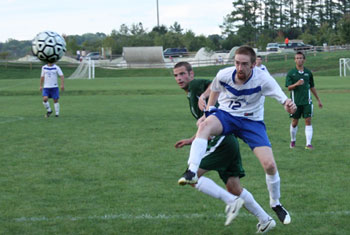 Christendom boasts one of the most unique sports programs in the nation featuring a high level of competition centered on the Faith. The sports are not seen as an end in themselves, but rather as a kind of formation. The athletics program offers varsity-level soccer (for men and women), basketball (for men and women), baseball (for men), rugby (for men), and volleyball (for women). The College is a member of the Shenandoah-Chesapeake Conference and of the USCAA.

The USCAA is a national organization that exists to provide quality athletic competition on a regional and national level. The USCAA focuses specifically on smaller institutions of higher learning and their student-athletes. The association believes that all athletes and programs deserve the same national opportunities as larger institutions and works to provide those opportunities. Find out more at theuscaa.com.