Christendom College President Dr. Timothy O’Donnell delivered an address during the 20th Plenary Assembly of the Pontifical Council for the Family in Rome, Italy. Held November 29-December 1, the assembly examined Blessed Pope John Paul II’s Apostolic Exhortation Familiaris Consortio and the challenges facing the family today. O’Donnell’s address was well received by church hierarchy and members of the Council and on the final day he was able meet with Pope Benedict XVI once again.

“It was a great experience to once more encounter the Catholicity of the Church, with people gathered from so many different continents—all who are deeply concerned about the great human good, which is marriage and the family,” O’Donnell said.

O’Donnell and his wife, Cathy, with the Council’s President, Ennio Cardinal Antonelli.

O’Donnell’s address discussed the cultural and social situation of the family in North America today.

“We must acknowledge that we as a Church, as a Christian people, in our failure to live in such a way as to be witnesses to the beauty and sanctity of marriage, bear much of the blame,” O’Donnell said in his address. “With our rejection of the Church’s teaching on contraception, with easy divorce, and with the annulment scandal in the United States, all of this has prevented a clear and beautiful witness to the sacrament of Christian marriage.”

O’Donnell, who has was appointed to the Council in 2002 by Blessed Pope John Paul II, presented a stark image of the family in America highlighting many of the challenges facing it, including the radical homosexual movement, the pornography industry, and the disrespect of human life. He concluded with a rallying cry to courageously and joyfully proclaim the Truth.

“We must also proclaim joyfully, yes, and prophetically, the Church’s teaching concerning the beauty of fatherhood, motherhood, and children as blessings, and the evil of contraception, which destroys this sacred bond,” O’Donnell said.

O’Donnell was impressed with Cardinal Antonelli and said that he is doing a wonderful job. 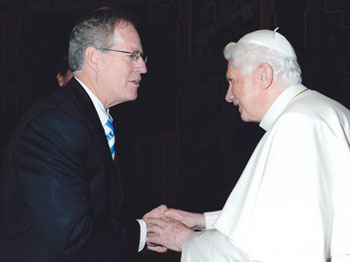 “The Cardinal brought the members of the Council together and guided them in what turned out to be a most fruitful discussion,” O’Donnell said. The Council had an audience with Pope Benedict XVI at the close of the assembly and O’Donnell was chosen from the group to meet with him.

O’Donnell was thrilled to be with the Holy Father again.

“I took his hands and said, ‘Greetings from Christendom College,'” O’Donnell recounted of his meeting with the Pope. “Ah, yes! God bless you,” was the Pontiff’s reply.

O’Donnell was the first layman to receive both his licentiate and doctoral degrees in Ascetical and Mystical Theology from the Pontifical University of St. Thomas Aquinas (Angelicum) in Rome. He is a Knight Grand Cross in the Knights of the Holy Sepulchre and he is a Consultor to the Pontifical Council for the Family. Additionally, he is the author of Heart of the Redeemer and has filmed many programs for the Eternal Word Television Network (EWTN) including Glory of the Papacy and Luke: Meek Scribe of Christ.

The Pontifical Council for the Family was instituted by John Paul II with the Motu Proprio Familia a Deo Instituta in 1981. It is responsible for the promotion of the pastoral ministry and apostolate to the family, through the application of the teachings and guidelines of the ecclesiastical Magisterium, to help Christian families fulfill their educational and apostolic mission. More information about the Council can be found at family.va.

Watch highlights from this event and an interview with O’Donnell here.