“When we won our first two games against Division III opponents, I thought this might be a pretty special season,” Coach Brown said.

He certainly was right. Not only did the Lady Crusaders win their first two games, they finished the season with a 5-1 record against NCAA Division III opponents. The Lady Crusaders finished 12th in the United States Collegiate Athletic Association (USCAA), and just missed participating in the national championship. 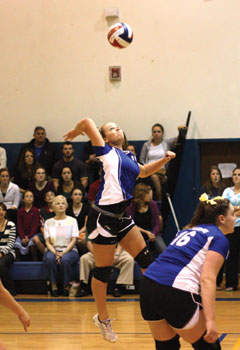 These stats definitely stand at the top of recent Crusader team achievements and will remain milestones to achieve for many teams afterward.

The one loss to a Division III opponent, Hood College of Frederick, MD, ended up being the best volleyball match the Lady Crusaders played during the season. Hood came out very strong and won the first two games, both by a score of 25-21. Following the huddle at the beginning of the third game, the Lady Crusaders came out and played the next two games at an extremely high level. Despite being outsized by Hood, the Lady Crusaders battled hard, extending plays and outlasting the other team multiple times. With each point, the Lady Crusaders built confidence. Fueled by near perfect play and the home court advantage of the Christendom Crazies, the Lady Crusaders won the third game, 25-23, and thus signaled a turning point. The next game saw the Lady Crusaders race out to an early lead against the Blazers of Hood. Led by the stellar play of junior Anna Harris, freshman Clare Duda was able to make accurate sets to the front-line hitters, including Bridget Vander Woude, Theresa Jalsevac, and Mary Barbale. As the game went on, Hood sensed the change in momentum. Hood used both of its time-outs in an effort to try and stop the Crusader onslaught. Unfortunately for the Lady Crusaders, it worked and the Blazers fought back into the game and pulled out a nail-biter by a score of 27-25. 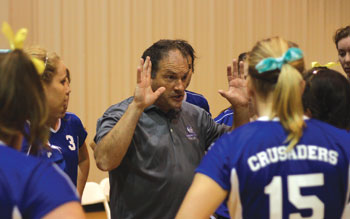 Coach Brown refocuses the Lady Crusaders during a time-out.

The next night, the Lady Crusaders faced the Gators of the College of Notre Dame in Maryland—another Division III opponent—and fueled by the confidence from the night before the team won the match in five games.

The season in general, but specifically these two games, really drove home the fact that the Lady Crusaders volleyball team “has arrived.” Taking a good Hood team to the brink of a fifth game and then defeating the Gators in five games showed the will, determination, and skill which the team played with throughout the entire season.

“These are definitely two of the matches that stand out in my mind from the season since they were against good competition and we played some of our best volleyball during them,” junior Anna Harris said.

The team defeated Washington Bible College in the Championship game of the Shenandoah Chesapeake Conference, finishing a historical 13-4 season. 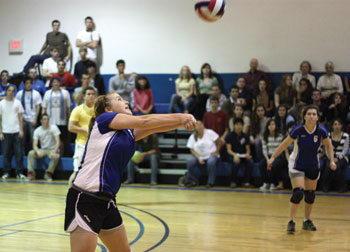 Best of all might be the fact that the team graduates no members of the starting lineup and will hopefully enjoy more years of having the best setter on the court: freshman Clare Duda. Duda demonstrated every game that she was the best setter—if not player on the court—through her decision-making and quality sets. She and fellow freshman starter Gabrielle Muskett were key additions to this year’s team and hopefully will help the team continue its winning ways in the upcoming years. Junior Theresa Jalsevac and sophomore Mary Barbale finished as the leaders in blocks for the team and sophomore Bridget Vander Woude led the team in kills. The team would like to thank all their fans that came out to support them throughout the season and the coaches, Mr. Mike Brown, Mr. Josh Petersen, and Mr. Jesse Dorman, for their dedication during the past season. 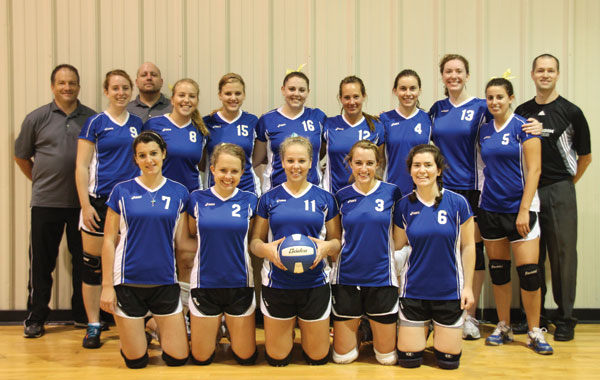