This semester the Graduate School welcomed a new student wearing a Roman collar who traveled halfway across the world to study at the school based in Alexandria, Va. Fr. Andrew Phu Vinh Luong began his MA studies this September at the request of his bishop, the Most Reverend Paul Nguyen Thanh Hoan of the diocese of Phan Thiet, Vietnam. Fr. Andrew is answering the call to earn a master’s degree in Catechetics so that he can help shape catechetical formation is his home diocese. 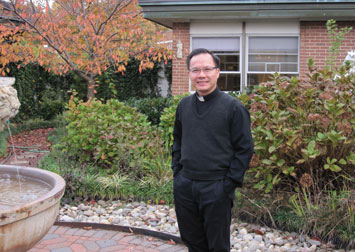 Fr. Andrew has always had a passion for catechesis, and used to teach catechetics at his local seminary. As a result, he was thrilled when his bishop sent him for further study. He spent two years in Houston, TX, perfecting his English, before coming to Virginia to enroll at Christendom.

Fr. Andrew is enthusiastic about his coursework and is always upbeat.

“The more I study…the more I love God and His Church,” he says.

He sometimes leads the prayer at the beginning of class and blesses his fellow students. He also offers Mass on a weekly basis at the Graduate School.

“My first aspiration is to achieve my duty in studying as my bishop wishes,” he says. “And my dream would be for the bishop to assign me to manage the catechetical program for our entire diocese.”

Fr. Andrew was born in 1966 in the Muong Man Commune of Vietnam’s Binh Thuan Province, and from the age of ten, helped in the family labor on a farm, while attending school through junior high. He seemed destined for life on the farm until a debilitating illness threatened to curtail his life. At only 16 years old, he contracted an intestinal hemorrhage, from which everyone expected him to die. But after three painful months of illness and convalescence, he regained full health. Crediting his recovery to the grace of God, the young farmer resolved to enter the priesthood in response to God’s call.

But the road to ordination was rocky, as the Vietnamese government and society commonly discriminated against Catholics and denied them educational opportunities. Without a high school diploma, seminary was out of the question.

Three years passed until one day, while Fr. Andrew was working on the railroad, a guard inexplicably selected him to take an examination (normally closed to Catholics) that would permit him to attend a technical high school, the Technical Secondary School of Railway Branch in Sai Gon. Thus armed with the equivalent of a high school diploma, Phu met the admissions requirement for seminary, and his bishop approved his application.

However, due to government restrictions on seminary entrance, Fr. Andrew was not allowed to enter the seminary and thus was forced to continue his job at the railroad for several more years.

Finally, in 1991, he received permission to enter St. Joseph’s Seminary, where he graduated and was ordained deacon in 1997, and ordained a priest on August 27, 1998. For ten years, Fr. Andrew served at the diocesan headquarters, where he held varied administrative and pastoral roles, such as secretary for altar boys and for sacred music, catechetics professor, diocesan treasurer, parish administrator, member of diocesan council, and head of various building boards.

Having overcome—with God’s grace—so many challenges on the road to priesthood, and having come to the United States and learned English, Fr. Andrew now proceeds to the next challenge in his vocational journey: earning an MA in Theological Studies with an emphasis on Catechetics.