College Ranked as One of Kiplinger’s Top 10 Private Colleges

Christendom College has been included in Kiplinger’s exclusive list of the Top 10 Private Colleges with the Lowest Sticker Price. The magazine, which recently ranked Christendom as a “best value” among the nation’s private institutions, ranked the college as third in the nation for its high-quality academics and affordable cost. 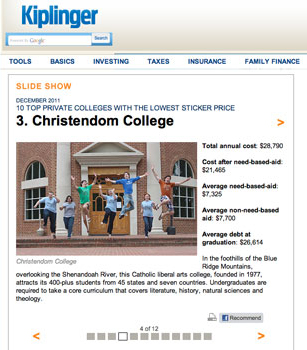 “You don’t have to pay a fortune—or rely on financial aid—to attend a top-quality private college or university,” Kiplinger’s website states. The site features a photo of the college’s library on its homepage as well as a photo of students in a slideshow highlighting the ten institutions.

The average cost of one year at a four-year private school has lately been about $37,000, according to the College Board.

“Christendom’s cost, including room and board, comes in well below the average at $27,540,” says Christendom’s Director of Admissions Tom McFadden. “And many students are able to deduct up to $20,000 off that price through our robust financial aid program. Assistance will vary in size—based on need, merit, and other factors—but you’re not going to find our caliber of education and personal formation anywhere in the country—especially at a price like that.”

Christendom College, which does not accept federal funds, is able to maintain its affordability in this economic climate through the generosity of its donors.

“Not taking Title IV federal funds puts us at a financial disadvantage,” Vice President for Advancement John Ciskanik says. “But this leaves us uniquely free to be unwaveringly Catholic and to have a program that flourishes in true academic freedom. The support of our loyal donors allows us to keep our education accessible in the absence of federal funds.”

Kiplinger assesses the quality of these institutions according to measurable standards, including the percentage of students who are admitted out of those who applied, the test scores of incoming freshmen, the ratio of students to faculty members, and graduation rates. This year, Kiplinger adjusted its criteria to better reflect the issues affecting families. Now, the rankings give more weight to the four-year graduation rate—a measure of the college’s ability to deliver academic support and of the overall cost to families—and to colleges that keep student debt down.

“The institutions on Kiplinger’s rankings for best value in private colleges represent schools that provide high-quality academics as well as affordable cost even in these tough times,” says Jane Bennett Clark, Senior Associate Editor for Kiplinger’s Personal Finance. “With money tight and the college choice so important, you have every reason to expect the best bang for your buck.”

Recently ranked one of the top ten colleges in the nation by the Intercollegiate Studies Institute, Christendom appears in numerous other national secular and religious guides each year including Barron’s Best Buys, Peterson’s Competitive Colleges, The Newman Guide to Choosing a Catholic College, and others.