Recent Graduates Excel in Politics at National and State Levels

“To have a political education founded in theory, philosophy, and practical implications is priceless,” 2010 alumna Emily Jaroma says. Jaroma is one of many Christendom College alumni, who have gone into politics and found themselves to be effective and prized members in the administrations of elected officials. 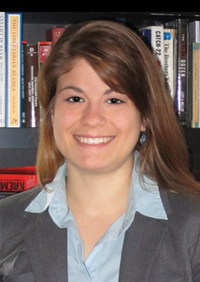 Jaroma serves on the Joint Economic Committee for Senator Jim DeMint (R-SC) and is also pursuing a Master’s Degree in Government from Johns Hopkins University. Working as a Research Assistant, she covers a variety of issues including, budget, taxes, welfare, monetary policy, and health care.

Jaroma says that it would be “an understatement” to say that her liberal arts education gave her a well-rounded education. She points out that even though she majored in political science, she also studied history and philosophy—amongst other subjects.

“The very fact that my education is not so specialized does not put me at a disadvantage, but rather at an advantage,” she says. “I understand why we believe in limited government and a free economic system, and I can effectively communicate these and other points to those with whom I work, in theory and practicality.”

She notes that while politics is the free exchange of ideas, in order to change the establishment, you have to effectively communicate those ideas.

“Sometimes simply citing data is not enough,” she says.

“If you can read and write well, you can effectively and clearly communicate your ideas to any audience,” Jaroma says. “Christendom’s emphasis on reading and writing has made it extremely easy for me to
transition to the Hill, where communicating clearly is so important.”

Chris Dayton, a political science major also from the Class of 2010, agrees with Jaroma. He, too, finds his Christendom education invaluable, saying that the College’s Political Science Department prepared him for his career “extremely well.” Originally from Manasquan, NJ, Dayton works as the Chief of Staff to the Minority Whip of the General Assembly in New Jersey’s State Legislature.

Dayton specifically mentions Political Science professor Bracy Bersnak’s classes on political theory and philosophy as being very helpful, saying that he experiences many different political theories when encountering elected officials. Political Science professor Dr. Bernard Way’s Political Practica class helped Dayton see the various avenues he could take his career and also gave him the opportunity to meet and discuss his many questions with those in public service. History professor Dr. Adam Schwartz informed him of where America, as a people, had started and what policies of antiquity to remember. Finally, Political Science professor Rafael Madan, in his Constitutional Law class, provided him with an understanding of the law in a way that Dayton says he could never have experienced anywhere else.

It wasn’t just Dayton’s intellect that was enriched at Christendom.

“Christendom’s education also provided me with a sense of balance and helped me achieve a work ethic that I can be proud of—having the discipline to sit down and get my work done,” he says. “I am proud to have come from a school that taught me what is worth fighting for and providing me with a balanced understanding of faith, government, and prayer.”

Like Jaroma, Dayton sees his Christendom liberal arts degree as a great asset in his career. He says that in politics there is a real need to be able to comprehend a lot of information from various topics.

“One day, I could be talking about pension and benefit reform and be able to give my boss a full review of the policy, or the next, be talking about education reform,” he says. “Being able to handle many different subject matters is a must and, with my liberal arts degree, I am able to accomplish that.”

Dayton admits that being a Republican in a Democratic state is difficult, but he is confident that through the values and education that he gained at Christendom, he will always have a strong foundation to fall back on.

“I consider my job to be a form of public service and I take to heart that I am there to help those in my community,” he says.

“Some people may say that there is no hope in politics and that some things are never going to change,” says Jaroma.

“Well, I have to say that nothing can be further from the truth. People are working hard every day in all different fields and issues in politics for change, it just takes a while.”