Entire Student Body to Protest Abortion at March for Life 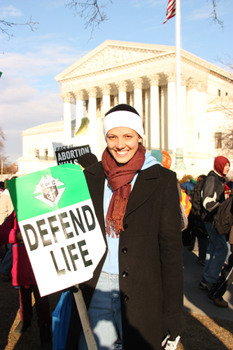 On January 23, the entire student body of Christendom College, as well as members of the faculty and staff, will join the hundreds of thousands of pro-life Americans at the 39th Annual March for Life in Washington, D.C. Christendom has cancelled classes for the day and the Student Activities Council has charted buses to transport over 400 people from its Front Royal, Virginia, campus.

“I love the fact that our school closes for the March and we all caravan together to DC,” says Kelsey McCrum, a senior and President of Students for Life. “In a very tangible way the college community is able to experience fighting for life together.”

McCrum believes that the March is an important witness to the nation demonstrating the resolve of the pro-life movement.

“We will not remain silent while killing is legal in our country,” she says.

She also notes that the March is important for pro-lifers themselves.

“It is so encouraging each year to go and see thousands upon thousands of pro-lifers fill the city of DC. We know we are not alone and it gives motivation to the attendees to continue the pro-life work that we do in our respective cities,” McCrum says.

Every year, Christendom has a very big presence at the March for Life, being one of only a handful of colleges to cancel classes for the event, which marks the anniversary of the Roe v. Wade decision that legalized abortion on demand in the United States. The College’s entire student body enthusiastically attends the March. In 1984, 1998, and 2009, Christendom students led the March for Life, carrying the lead banner and flags.

The theme of this year’s March is “Unite on the Life Principles to Overturn Roe v. Wade and, With Love, Protect Mothers and Preborn Children. No Exception!  No Compromise!” The “life principles” refer to a comprehensive statement of the position motivating the pro-life movement and serve as the basis for pro-life moral and legal theory by which the American people can overturn Roe v. Wade.