Renowned Scholar and Author Russell Hittinger to Speak at College

Renowned scholar and author Russell Hittinger will be giving a lecture on Friday, January 27 at 4 p.m. The talk, entitled Are Societies Made Unto the Image and Likeness of God? A Thomistic Response to a Disputed Issue, will be held in the St. Kilian’s Café. 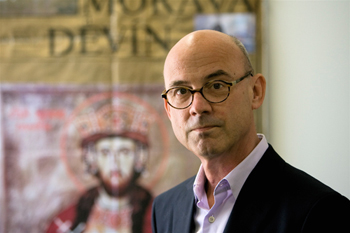 Since 1996, Hittinger is the incumbent of the William K. Warren Chair of Catholic Studies at the University of Tulsa, where he is also a Research Professor in the School of Law.  He specializes in issues of philosophy, theology and law.  From 2002-2005 he was the Chair of the Department of Philosophy and Religion.

His most recent book is Thomas Aquinas and the Rule of Law. The First Grace: Re-Discovering Natural Law in a Post-Christian Age was published in Jan. 2003.  His essays on papal social doctrine appeared last year in a two-volume work Law and Human Nature: Teachings of Modern Christianity (Columbia University Press, fall 2005).

Yale University Press will publish his current book, Paper Wars: The Papacy and the Modern State, next year.  He is under contract with Emory to finish a book entitled Aquinas’s Questions on Law: A Primer.

He is organizing the 50th anniversary observance of Pope John XXIII’s encyclical Pacem in terris for the Holy See in Rome.