Students Lead Hundreds of Thousands in the March for Life 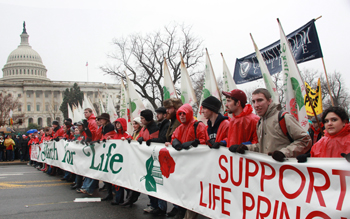 On January 23, the entire student body of Christendom College, including members of the faculty and staff, led hundreds of thousands in protesting abortion at the 39th Annual March for Life in Washington, D.C. Select students were given the honor of carrying the lead March for Life banner as well as the official March for Life flags. This was the fourth time in the college’s 34 year history that it had been selected to lead the walk down Constitution Avenue to the Supreme Court.

“It was an honor and so exciting,” said Sophomore Rebecca Deucher, one of the students given the opportunity to carry the lead banner. “Marching at the beginning gave you a sense of the order and unity of the movement—you felt like you were the March for Life.”

Deucher’s brother, Peter, a freshman who carried one of the official flags, felt the same sense of unity.

“We felt like a phalanx of prayer,” he said. “We were praying the rosary or singing hymns and it really reinforced our unity and our mission. We’re all there for one thing. The challenge for us now is to continue leading today and tomorrow in the fight for the unborn—march at the front of the line.”

“It’s a story I’ll be telling my kids about,” banner-carrier Sophomore Klarissa Blank said.  Blank noted that everyone kept their spirits high, despite the cold and rain, with “singing and cheering.”

Throughout the March, between prayer and hymns, students shouted the classic chant, “Hey, hey, ho, ho, Roe V. Wade has got to go,” and other rallying cries.

“What a great joy and honor it was to be with so many other faith-filled citizens,” College President Dr. Timothy O’Donnell said. ” Standing up for the sanctity of human life by leading the March was a great moment for our students to manifest concretely, through their actions, what they have learned in the classroom and help fulfill the College’s motto, ‘to restore all things in Christ.'”

The March for Life, which is held each year to mark the anniversary of the Supreme Court’s divisive 1973 decision that legalized abortion across the land, is consistently the largest protest event held in the District of Columbia each year. Since its founding, Christendom College has routinely canceled classes on the day of the March, and the student activities council charters as many buses as needed to transport all 400+ students, and numerous members of the faculty and staff, to the March.

Christendom College students are active in pro-life work year round, leading prayerful protests at a Planned Parenthood Clinic in Washington once a week, as well as taking part in sidewalk counseling and volunteering at a local crisis pregnancy center.