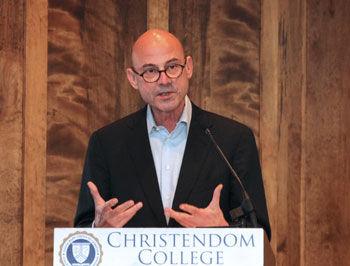 Renowned scholar and author Russell Hittinger delivered the annual St. Thomas Aquinas lecture to the students and faculty of Christendom College on January 27. The talk, which examined the nature of societies and marriage, was entitled, Are Societies Made Unto the Image and Likeness of God? A Thomistic Response to a Disputed Issue.

In his lecture, Hittinger delved into the works of St. Thomas Aquinas, Pope Leo XIII, and other popes to illustrate how the image of God is reflected in a society. He said that in order for a society to bear the image of God there needs to be unity.

“For where there is no unity, there is nothing to bear the image not even dimly and from afar,” he said.

During the question and answer period, Hittinger warned students to be careful how they argued in defense of marriage when encountering the same-sex marriage movement. Christians should not use the material ends of marriage in their argument.

“You’ve got to be very careful because those things can be detached,” he said. “So it can become like a partnership. We will merge exercise machines, TIAA-CREF accounts, and agree to have child. That is not necessarily marriage.”

This thought provoking lecture can be downloaded at Christendom on iTunes U.