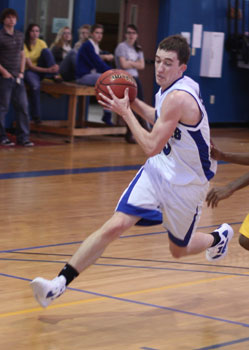 In the first half, the Crusaders raced out to an early 23-11 lead behind senior Brian Fox. The Appalachian team fought back and at halftime the Crusaders clung to a 4-point lead, 48-44.

The second half of the game demonstrated the full potential of the Christendom men’s team, as they held the Appalachian team to just 22 points in the second half. The Christendom offense played as if there were six or seven Crusaders on the court as fast breaks and beautiful passing sequences resulted in score upon score. Junior Brendan Krebs led the charge in offense and defense. Missing just two shots himself, Krebs finished with 25 points and eight assists. Freshman Joe Walsh led all scorers with a career high of 30 points. Brian Fox added 21 points and nine rebounds. The final score: 104-66.

“Not only was there an offensive barrage from the Christendom team but also the communication and overall team play was tangible in the second half,” Head Coach Chris Vander Woude said. “It is quite possible that this 104-point score is the highest single game total of any Christendom basketball team in college history and one which may lead the record books for sometime.”

The Gators of Notre Dame took an early 11-6 game lead, before the Lady Crusaders would battle back to tie the game at 23 at halftime. In the second half, the Christendom team fell behind 53-40 with 8 minutes to go. However, the Lady Crusaders resiliency continued against odds and cut into the lead. Led by Sophomores Mary Barbale and Morgan Kavanagh the team tied the game up at 56 with just three minutes left to play. With the game tied, freshman Elizabeth Slaten scored four of her seven points in the last two minutes and the Lady Crusaders held onto a tremendous come-from-behind win over the Division III Gators.