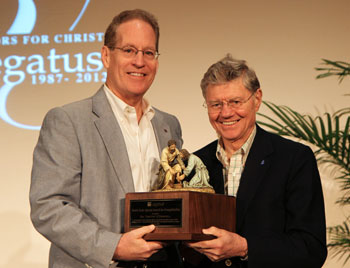 Christendom College President Dr. Timothy O’Donnell received the The Bowie Kuhn Special Award for Evangelization on February 4. The Award was presented during the 2012 Legatus Summit, which celebrated Legatus’ 25th Anniversary.

“I would like to thank Tom Monaghan for 25 years of Legatus,” O’Donnell said during his remarks following the reception of the award. “This a great honor for me personally, but nothing that I have done in my life would be possible without my wife, Cathy.”

The Bowie Kuhn Special Award for Evangelization was named in honor of Bowie Kuhn, the late commissioner of Major League Baseball, and a founding member of Legatus. Kuhn, who died in 2007, dedicated much of his life to serving the Catholic Church. Kuhn was a friend of O’Donnell and of the college, having attended Christendom’s Summer Institutes, Commencement Exercises, and a trip to Portugal and Spain led by the late Dr. Warren Carroll.

“I hope that in some small way I may be able to imitate the virtues of this great man in my life,” O’Donnell said of Kuhn.

Past recipients of the Award include entrepreneur George Maley, philanthropists L.H. and Dianne Bayley, and Tom Peterson, the founder and CEO of Catholics Come Home.