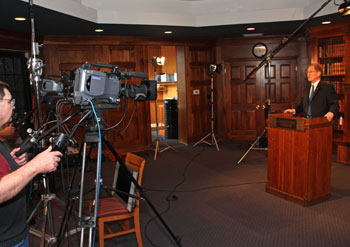 The series was filmed at Christendom College in the St. John the Evangelist Library.

Christendom College President Dr. Timothy O’Donnell will host a new series on EWTN entitled “The Catholic Epistles: the Voice of Christ in the Voice of the Apostles.” The series will begin airing Sunday, March 4 at 5:30 p.m.

“The Catholic Epistles” is a 13-part series that examines the place of the Catholic Epistles in the New Testament Canon and their witness to the apostolic teaching. The series was filmed at Christendom College in the St. John the Evangelist Library and will air Sundays at 5:30 p.m.

For more information about EWTN and its programming, click here.

O’Donnell has hosted numerous shows on EWTN including The Glory of the Papacy and Luke: Meek Scribe of Christ. He was the first layman to receive both his licentiate and doctoral degrees in Ascetical and Mystical Theology from the Pontifical University of St. Thomas Aquinas (Angelicum) in Rome. A Knight Grand Cross in the Knights of the Holy Sepulchre, he is a Consultor to the Pontifical Council for the Family. Additionally, he is the author of Heart of the Redeemer and Swords Around the Cross: The Nine Years War.