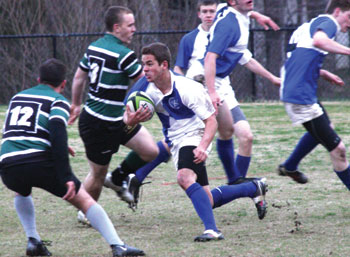 The Christendom College Rugby team will play its first game this weekend against the University of Maryland of Baltimore County (UMBC). Last year, the Rugby team posted an historic record of 6-1 and hopes to continue the trend.

“I hope we go undefeated,” says sophomore and team captain Conor Coyne. “I am pretty sure that the guys will be able to fill the void left by last years seniors, since we have some new game-changing players.”

Coyne says that the big game that everyone is looking forward to is the St. Patrick’s Day match on March 17 against the Catholic University of America.

The team will play five games this year including its first-ever home game on February 25 against American University. Assistant Coach James Hannon (’12) says that while the rugby program at Christendom is young, it has already seen big victories and they hope to build on those.

“We’re focusing a lot on success in fundamentals and working as a team,” Hannon says. “But ultimately our goal is to win.”