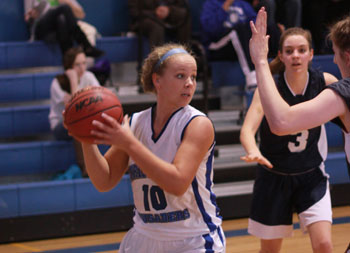 On February 18, the Lady Crusaders capped off a tough season with two big wins in the Shenandoah Chesapeake Conference Tournament to claim the Tournament Championship at Christendom College.  The men’s team placed third in their tournament hosted at Mid-Atlantic Christian University in Elizabeth City, N.C.

The women’s basketball team defeated Appalachian Bible College during the first round of the tournament and then won the final game, defeating the Davis Falcons, who the Lady Crusaders had lost to twice during the regular season.

“We had lost to Davis by three points each time,” Lady Crusader Coach Mike Brown said. “This third time was the charm. I am so proud of the team. We saved our best game, and especially our best defensive effort, for the last game of the season and it paid off.”

The Lady Crusaders won the tournament championship by a score of 60-43. Sophomore Mary Barbale was named tournament MVP. The win gave the team consecutive winning seasons for the first time in college history, going 11-10.

The men’s team also faced Davis College in the first round of the tournament. The Crusaders played an amazing first half leading the Falcons by four at halftime. In the second half, the Falcon’s hot shooting and pressure defense proved to be too much and the Crusaders fell.

In the third place game, the Crusaders played the host Mid-Atlantic Christian Mustangs and played the game of their lives. The Crusaders stayed in control the entire game despite having lost to the Mustangs by 19 one week ago.

Senior Dominic O’Donnell had the game of his life as he finished with 17 points and 10 rebounds. Brian Fox, despite having just two points at halftime, finished with 16, and sophomore reserve Christian Kopeck added an important 10 points. Pat Stein, Tim Vander Woude, and Jon Fioramonti added stellar play for the Crusaders as they knocked-off the home team by a score of 56-46 to claim the third place trophy.

“This definitely was the sweetest win of the season,” Athletic Director and Crusader Coach Chris Vander Woude said. “I am so happy for the three seniors who get to finish their career with a win. Congratulations to both teams for their hard work and dedication throughout the season.”