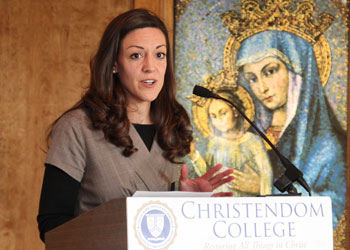 Author and Professor Dr. Susan Hanssen delivered a lecture entitled “Henry Adams on the Sanity or Suicide of America” to the students and faculty of Christendom College on February 27. The lecture examined the history of education in America and Henry Adam’s perception of it.

Hanssen, an associate professor of history at the University of Dallas, received her doctorate from Rice University in Houston, Texas. She was the 2010-2011 Garwood Fellow at the James Madison Program in American Ideals and Institutions at Princeton University, where she prepared her forthcoming book on The Education of Henry Adams and the role of education in maintaining cultural identity in America.

In her talk, Hanssen explained that there were three phases in the history of higher education in America: the religious liberal arts college, the multiversity, and then the restoration.

Most of the old schools in America, such as Harvard or William and Mary, started out as religious liberal arts colleges. In these schools the education was united, she said.

“Because we are studying the one universe that was created by one creator, one God, one universe—the university,” Hanssen said of these schools. “They were devoted to a common language.”

Hanssen then described how at the close of the American Civil War there was an emergence of what Henry Adams called “the multiversity.” All of the little religious colleges begin transforming themselves into the state universities in Germany.

“These schools are devoted to research, empirical sciences, and social sciences—if you’re not a science, you don’t count,” she said. “Instead of moral theology, you’re doing psychology. Everything had to be transformed into a science in order to be accepted into the world of hard science. And all of these sciences do not speak the same language.”

Henry Adams, and many that followed him, had concerns about how this new form of education would prevent people from being able to stand up to the state.

After World War II, there is an attempt at the restoration of the university—the third phase. In this phase there are three approaches: the Study of the Great Books, the study of the history of thought in Western Civilization, and then one which combines the two programs.

Of the later Hanssen remarked that “there are eternal truths, but there is also the ongoing tradition un-flowering through history—a beautiful combination of both efforts at restoration.”

“This third part of the restoration really doesn’t take off until the 1970’s,” she said. “You guys are part of it along with the University of Dallas. That’s our story and there are many of us now.”

Concluding, Hanssen noted that, though Henry Adams was not a Catholic, he still believed that the Church was the bearer of metaphysical truths and natural law throughout history and also the “bearer of revelation, which is in perfect conformity with what we can know through natural reason.”

This fascinating lecture was part of The Faith & Reason Lecture Series and can be downloaded at Christendom on iTunes U.