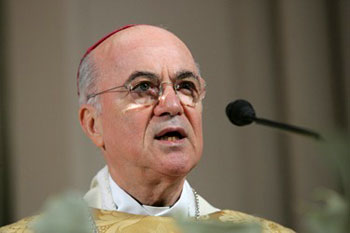 Archbishop Carlo Maria Viganò, Apostolic Nuncio to the United States, will visit Christendom College on March 18, 2012. The Archbishop will celebrate Mass for the students and faculty and then join them for brunch.

Pope Benedict XVI named Archbishop Carlo Maria Viganò to be the nuncio to the United States in October of last year. His previous position was the secretary-general of the commission governing Vatican City.

“I believe this is his first visit to a Catholic college and to the Diocese of Arlington,” College Chaplain Fr. Donald Planty said. “It is a great honor to host him.”

The Papal Nuncio is a Vatican diplomat with the rank of ambassador. He is responsible for diplomatic relations with the government and serves as a representative of the pope to the Church in the country to which he is assigned.

Archbishop Viganò was born Born in Varese, Italy, and was ordained a priest in 1968. He earned a doctorate in both canon and civil law and entered the diplomatic service of the Holy See in 1973. He  worked at the papal diplomatic mission in Iraq and Great Britain and then, from 1978 to 1989, the Secretariat of State. He was named Special Envoy and Permanent Observer of the Holy See to the Council of Europe in 1989.