Christendom College: One of Top Conservative Colleges in US 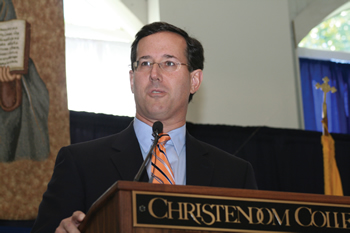 Christendom College has once again been chosen to be a part of the Young America’s Foundation’s (YAF) Top Conservative Colleges listing .

YAF’s Top  is an exclusive list, which features institutions that proclaim, through their mission and programs, a dedication to discovering, maintaining, and strengthening the conservative values of their students. The list aims to provide high school students with a ranking system based “on the overall experience that colleges offer,” the YAF states on its website.

“Students who are interested in going to a college dedicated to the values that make this nation great should certainly pay special attention to this list,” says Christendom’s Admissions Director Tom McFadden. “Christendom is definitely a conservative college—we do not even take Title IV Federal funds so that we can ensure our academic and religious freedom. We’re happy that the Young America’s Foundation has seen the merit in what we offer our students.”

The listing, which features a brief description of each institution, says that the original vision of Christendom lives today through the institution’s devotion to Catholic theology and way of life. The core curriculum reinforces a Catholic worldview and teaches students to “distinguish truth from error or distortion, and then to communicate truth accurately, effectively, and convincingly to others.”

According to the YAF, Christendom is among those schools, which offers “an alternative to the liberal status quo.”

“[These schools] allow and encourage conservative students to explore conservative ideas and authors,” YAF says. “They offer coursework and scholarship in conservative thought and emphasize principles including smaller government, strong national defense, free enterprise, and traditional values. Furthermore, they avoid trends in academe by continuing to study Western Civilization instead of straying toward the study of Marxism, feminism, sexuality, postmodernism, and other distractions that do not give students a complete understanding of our country, our culture, and its founding principles.”

Other schools to make the Top Conservative College list include Hillsdale College in Michigan, Liberty University in Virginia, and Grove City College in Pennsylvania.

Ranked as one of the top ten colleges in the nation by the Intercollegiate Studies Institute, Christendom appears in numerous other national guides each year, including Kiplinger’s Top Ten Private Schools, Barron’s Best Buys, Peterson’s Competitive Colleges, The Newman Guide to Choosing a Catholic College, and others.