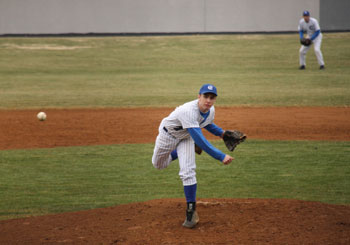 The Crusader baseball team has their season home opener today with a doubleheader against Baptist Bible College at Bing Crosby Stadium in Front Royal. The first game will begin at 4 p.m. with the second scheduled to start at 6:30 p.m.

The Crusaders had a difficult season last year, with many of their games being cancelled due to rain and poor field conditions.

This year’s roster includes a number of freshmen who hope to add to the team’s effort to get some wins this season. Coach John Mercandetti returns for his third season.

Bing Crosby Stadium is the official stadium of the Front Royal Cardinals of the Valley Baseball League. Named in honor of entertainer Bing Crosby, who, in 1949 made a visit to Front Royal to help rally support for the new stadium, the facility was fully renovated in 2006.