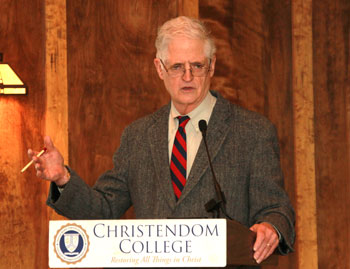 Historian Dr. Emmet Kennedy delivered a lecture entitled “The Survival of a Non-Juror: the Abbé Sicard and the Founding of the National Institute of Deaf-Mutes during the Reign of Terror” to the students and faculty of Christendom College on March 12. The lecture was part of the college’s Faith & Reason Lecture Series.

Kennedy’s lecture examined the life of Roch-Ambroise Sicard, a priest who educated the deaf and mute during the Reign of Terror. Sicard avoided execution twice during the tumultuous times of the French Revolution. Kennedy examined whether Sicard was a “girouette,” that is, a turncoat who changed with every regime and tailored himself to meet the new requirements.

“Girouette is a phenomenon during the French Revolution,” Kennedy said. “There are lots of them. I coined the term ‘girouettisme,’ which means the practice of being ‘girouette.’ So there is this question, if Sicard was a ‘girouette’ or practiced ‘girouettisme’—and that’s how he managed to survive.”

Kennedy pointed out that Sicard never took the oath to the Civil Constitution of the Clergy, which subordinated the Roman Catholic Church to the French government, while at the same time he boasted Enlightenment views.

“He certainly was someone who was conscious of his public image, but he certainly does not sacrifice his priesthood or Christianity much at all,” Kennedy said.

This insightful lecture on an often-neglected part of history can be downloaded at Christendom on iTunes U.